While leading the commencement of issuance and distribution of Huduma Namba cards in Machakos County, the CS noted that National IDs would be replaced by Huduma Namba Cards.

Mucheru specifically revealed that the current ID card would cease operations on December 12, 2021 after the nationwide rollout of the Huduma Namba.

During the launch of the first set of Huduma Nambas during 11th Mashujaa Day in Kisii, President Uhuru Kenyatta had revealed that the cards would be issued by December 1, 2020. 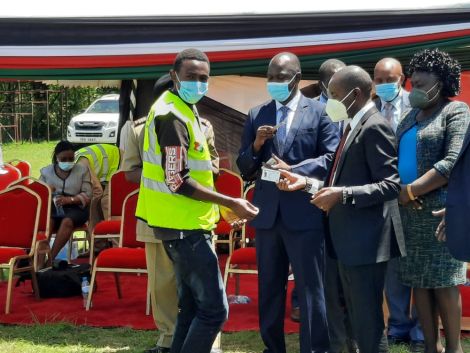 The Huduma Namba is expected to aggregate the numerous information sets that are needed to get various government sets ranging from NHIF, NSSF, birth details, driving license, KRA information, among others.

The only stumbling block at the time was the appointment of former IEBC Director of Voter Education Immaculate Kassait as Kenya’s first Data Commissioner.

Kassait was sworn in on Monday, November 16,  the country’s first holder of the position in an event that paved way for the rollout of Huduma Namba.

Children below the age of 18 will receive the Minors Huduma Namba Card. Newborns will be required to be registered within 90 days after they are born.

The minors will only receive the cards upon attaining 6 years old and use it to enroll in school.