Skip to content
Politics
June 2, 2021 tmz editor
Police seal off road in Nairobi during a past raid.

Nairobi-based Turkish billionaire, Selahaddin Gulen was found in Turkey, days after he was abducted while heading to the Directorate of Criminal Investigation (DCI) headquarters along Kiambu Road.

Turkey’s security services admitted to having kidnapped the tycoon and flew him to Turkey. Selahaddin was accused of being a member of the outlawed Fetullah Terrorist Organisation (FETO).

His uncle, Fettullah Gulen, who sought asylum in the US was accused of orchestrating a failed military coup in Turkey in 2016 which claimed the lives of 251 people and injured over 2,000 citizens.

“The Turkish intelligence captured a member of FETO abroad and brought him back to Turkey. 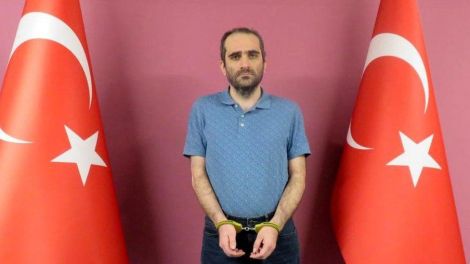 However, the local media did not disclose whether the operation was authorised by Kenya’s National Police Service (NPS).

Foreign Affairs Principal Secretary Macharia Kamau was unavailable for comments on the foreign affairs issues especially after other countries declined to accept Turkey extradition requests of individuals involved in the alleged military coup.

The US declined to extradite Selahaddin’s uncle and cleric, Fettulah Gulen, citing the Turkish authorities’ lack of evidence under President Recep Tayyip Erdogan.

Fettulah Gulen owns schools and charities in several countries including the US and Kenya.

Selahaddin, who was kidnapped from Kenya, was battling against his extradition through a lawsuit filed at the Kiambu Law Courts. Turkey wanted him extradited over child molestation allegations.

The billionaire argued that the real motive behind the plan was the ties with his uncle. In the affidavit, he lamented that “It is suspected that my uncle may have supported the coup. Turkish authorities began a crackdown on all the people who were directly or indirectly related to Fetullah Gulen. His relatives in Turkey were arrested on fictitious criminal charges and are serving long prison sentences.”

Kiambu Law Courts put on hold plans to fly him to Turkey and was set to issue a ruling on the matter later on. It further summoned Interior CS Fred Matiang’i and Inspector General of Police Hillary Mutyambai to address the judge over the billionaire’s whereabouts.

Selahaddin’s wife, Serriye Gulen, in May 2021, recorded a video pleading with Turkish and Kenyan authorities to safely return her husband. Serriye is a teacher at a school in Nairobi.

“He was kidnapped by a group of anonymous people and taken to an unknown place, I have not heard from him since that day,” the wife complained.

How UK ‘Expats’ Brought Down One Of Kenya’s Giant Construction Firms, Spencon