Kipchoge spoke on Friday, September 11 ahead of his historic race against Ethiopian Kenenisa Bekele and other elites in London, UK on Sunday, October 4.

The legendary athlete weighed in on the plight of sports personalities who end up bankrupt after they retire.

“As you know, sports is just a profession like any other. We are in a profession whereby we need to appropriately plan in order to absorb the shock of life.

“We don’t have to cry about the situation, but to just say the truth,” Kipchoge stated.

He added that sports personalities can change their plight through empowerment and proper management, being advised and trained effectively.

Sports psychologist Kanyali Ilako added that mismanagement often leads athletes into depression. Transition, she says, is crucial in an athlete’s life and without good career guidance, they tend to develop anxiety and depression.

“It is important for athletes to work with psychologists in the early stages of their careers to understand what lies ahead in terms of injuries, transitions and other career issues such as terminations,” Kanyali advised while speaking with TMZ.co.ke.

The athlete also earned Ksh 5.4 million more by winning the 2018 London Marathon and banked Ksh 6 million after breaking the 2-hour barrier in the Ineos Challenge in Vienna, Austria.

He also enjoys multiple deals with Nike and the Government of Kenya as a tourism ambassador. Kipchoge has also been rewarded with several cars after multiple wins.

His overall net worth is estimated at over Ksh 318 million. If he wins the London, UK 2020 elites marathon, Kipchoge will earn Ksh 5.5 million and Ksh12.5 million if he sets a new world or course records. 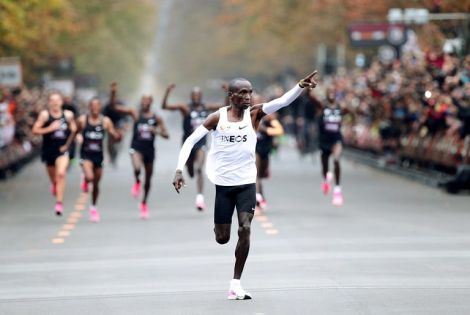 Former K24 journalist Mwanaisha Chidzuga admits to have had covid 19