Kenya National Union of Teachers(KNUT) officials petitioned President Uhuru Kenyatta to intervene on the row between the union and Teachers Service Commission (TSC).

Speaking to the media on Sunday, November 29, KNUT national treasurer John Matiang’i noted that the commission had hatched a scheme to further escalate the union’s financial woes.

He added that this would not be tolerated as the union would fight tooth and nail in order to stay afloat. 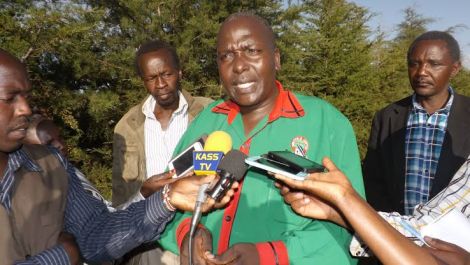 “Your excellency, the President, I appeal to you as the father of the teachers of this country, take up this matter by yourself.

“The obituary of this union should not be written when you are the Head of State,” he stated.

He went on to fault the commission for offering promotions and increment of salaries to woo teachers to exit the union.These actions, he emphatically stated, would further paralyze the union.

The row between KNUT and TSC has been an ongoing battle for supremacy as the latter has been faulted for hindering the operations of the union thus causing it to shut down 110 offices across the country.

Initially, the union had called upon the ministry of Labour and Social Protection Cabinet Secretary, Simon Chelagui to intervene on the matter.

KNUT Secretary General Wilson Sossion tabled the union’s grievances noting that the commission’s inefficiency had caused the union to massively cut down on members from 187,471 in June 2019 to 34,312 in October.

He further argued that the paltry Ksh 25 million payment the union received in October, could not cater to the union’s operations.

“The annual budget for the ADC is approximately Ksh 200 million, which the union saves over time. What can we do with Ksh 25 million? It cannot even meet our payroll budget,” stated Sossion.

KNUT Secretary-General Wilson Sossion addresses journalists in Nairobi on May, 16 2019

‘It was not a car accident!’ Anerilsa Muigai speaks out on Tecra’s death