Skip to content
Exclusives FEATURED TOP STORIES
June 16, 2020 tmz editor
The pride of stray lions which were sighted outside the Nairobi National Park in October 2019.
The Kenya Wildlife Service (KWS) on Monday, June 15, 2020, announced the week-long implementation of a fresh directive to move several lion prides to protected areas.

Speaking to Tmz.co.ke KWS Communications Director Paul Jinaro, explained that the new initiative was undertaken to mitigate the rising cases of lion-human conflict.

“KWS in collaboration with Solio Ranch in Laikipia County agreed on the implementation of strategic mitigation measures to save the lions as well as counter the threat they pose to the human population in the high-risk areas,” he explained.

“Some of the mitigation measures include repair of the ranch fence to deter lions from straying out, driving the carnivores back to the ranch through capture, and translocating them to other suitable protected areas,” reads part of the statement released by KWS.

Solio Ranch has one of the highest densities of lions per square kilometer in Kenya.

The 17,500-acre reserve, 22 km north of Nyeri Town, also plays a major part in the protection and breeding black rhinos in Kenya

In the recent past, several cases of lions sneaking out of the ranch and straying into community areas have been reported, thus posing threat to human life and depredating on livestock.

On March 18, a lion attacked and killed an 11-year-old girl, Asha Mohammed, in Dhovuni village in Voi, Taita Taveta County, leading to protests by locals who vowed to hunt down the lions in the area.

One of the survivors, Michael Nzalu, said that he was outside his house when the lion pounced, leaving him with injuries on his head, hands and chest.

“I ran to the house but it followed me inside and started attacking me, my wife and child. We overpowered it but it left me with serious injuries,” he narrated

He was consequently rushed to Moi County Referral Hospital in Voi for emergency treatment.

In their latest press release, KWS vowed to fully implement the new strategic measures to ensure that similar incidents were avoided altogether.

“KWS thanks the local community for being tolerant and accommodating wildlife. The Service promises to continually take intervene measures to manage lion-human conflict cases and enhance peaceful co-existence,” the statement further reads.

A recent report by the KWS revealed that the country is losing an estimated 100 lions per year, with the current population is estimated to be less than 2,000.

“Loss of habitat and biodiversity due to corruption, climate change, poverty and increased human population pose the greatest threat to conservation of wildlife, protected areas and the country’s ecosystem. 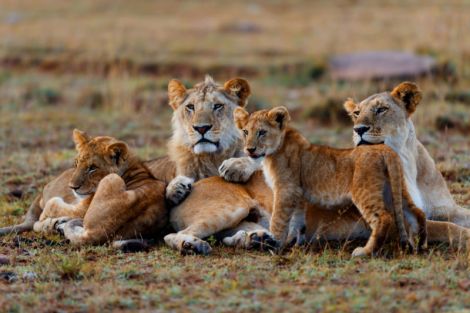 A pride of lions pictured.