Skip to content
Entertainment Exclusives
May 4, 2020 tmz editor
Elderly people mark the United Nations 8th Annual World Elder Abuse Awareness Day on June 15, 2013. On May 4, 2020, a group of elderly men and women held a protest in Laikipia County
Hundreds of elderly men and women braved a torrential downpour and took to the streets in Laikipia County on May 4, in protest.

Navigating the slippery and muddy ground while dripping in rainwater, the members of the Laikipia Council of Elders Association aired out their grievances over failing to receive funds under the Old Persons Cash Transfer (OPCT) programme.

“They asked for our votes. Did they go to Parliament and forgot what they had promised?

“President Uhuru we are asking for the money for the elderly because we have never received any. We need you to take action,” Jane Njoki, a widower stated.

She further explained that they no longer trusted their local representatives and asked the president to present the funds to them himself.

“We are very hungry because, since the onset of the Coronavirus disease, our children are unable to provide for us, however, don’t send those who stole our money, instead, bring the money yourself,” she added.

The group went on to reveal that they had been told that they’d each receive Ksh3,500 but had received nothing to date.

“They should give us the money because we do not want to die before using that money. It would be wrong,” one of the protestors stated.

“We want Uhuru to give us our money because we are old people and we fought for the freedom of this country,” another added.

The visibly frustrated and weary group went on to express their regret of having queued for hours on election day, only to end up being duped by their representatives.

On April 20, The Ministry of Labour and Social Protection released Ksh8.7 billion to the cash transfer programmes as ordered by President Uhuru Kenyatta.

Labour and Social Protection Principal Secretary Nelson Marwa announced that said the money would be paid out to 1,084 cash transfer beneficiaries.

He further stated that the money was meant to cushion the vulnerable groups from the negative effects of the Covid-19 pandemic.

“A beneficiary is allowed to withdraw all or a part of this amount at any time during a period six period,” he explained at the time. 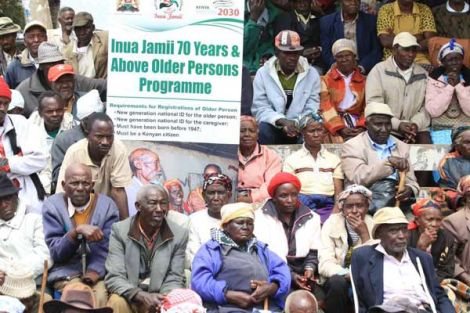 Elderly people follow during the launch of Inua Jamii cash transfer programme in Nyeri in 2017.

‘I have standards, I don’t date gorillas!’ Akothee on dream ‘husband’