Skip to content
Entertainment FEATURED Life Style
September 5, 2020 tmz editor
Citizen TV anchor Lilian Muli in an Instagram post on August 19, 2019
FILE
With the digital space expanding and many Kenyans shifting from traditional media to new media, incidences of cyberbullying and invasion of privacy have also been on the rise.

The texts were seemingly triggered by a gift she received from someone whose identity she preferred to keep under wraps.

The gift came in the form of rose flowers, a bottle of wine and a box of chocolates.

“I am getting a lot of private messages on Instagram and one would imagine that this is a dating app. Honestly don’t believe everything you hear.

“I am taken and my heart belongs to one man only. I am not chasing only except for Jesus, but we can be friends,” she politely fended off.

In October 2019, the businesswoman took a break from Instagram. However, she declined to reveal the reason as to why she did so, arguing that all she wanted was to rest and enjoy her personal space.

“Unfortunately in our case, it won’t happen. But I would like to encourage you to find a young lady, get to know her personally and build a life with her. God loves you. Take care of yourself Timo Sem,” Radull responded.

Interior CS Fred Matiang’i stated that the government is formulating a plan to crack down on cyberbullies and digital lawbreakers.

The CS, while speaking during a media event at Serena Hotel on Friday, September 4, referred to the said individuals as digital vigilantes.

“We want to ensure that no one’s space is invaded and also crackdown on those (keyboard warriors) who are politically instigating to promote violence and attack others via social media as we approach 2022 election period, “Matiang’i disclosed. 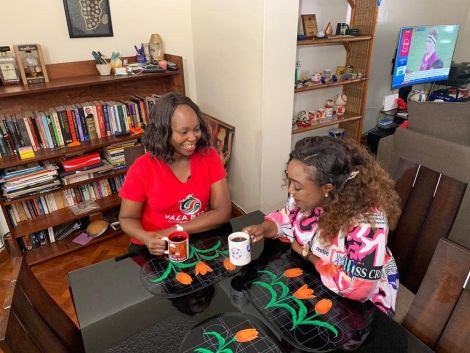 Mama bear! Celebrities who rarely show photos of their babies