Skip to content
Politics News TOP STORIES
June 14, 2020 tmz editor
Police marking a roadblock in Kenya. The cessation of movement order by President Uhuru Kenyatta has changed life as we know it.
Residents of Limuru, Kiambu County voiced their concerns on Sunday, June 14 over the increased number of roadblocks in the area as part of plans to enforce the cessation of movement order.

They claimed that police also moved the roadblocks inwards thereby stopping them from accessing Nairobi Metropolitan Area. Some of the residents who spoke to journalists lamented that the measures had resulted in plummeting business and job losses.

In addition, they observed that thousands of Limuru residents who work in Nairobi and commute daily were staring at job losses and business closures if the situation will persist. 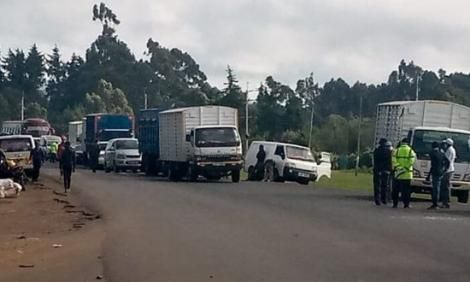 They questioned why the police had devoted such immense resources to Limuru despite there being other Covid-19 hot-spots in the country.

Among those who spoke to journalists was Likana Sacco Chairman Peter Muiruri who observed the irony of the roadblocks as people were crossing into Nairobi on foot.

“Those coming from various areas are alighting and walking slowly to the other side. But yet vehicles are the ones being stopped.

“The way we see it, this is pointless because this disease is transmitted by humans. If you stop cars and you don’t stop the people, then you are doing nothing,” he argued.

Compounding the situation is the fact that many individuals are struggling to access quality healthcare, with facilities such as the Tigoni Level 4 Hospital now out of reach.

The residents demanded that the government move the roadblocks to allow Limuru residents to travel to Nairobi, warning of unprecedented job losses if the situation was not corrected.

“Limuru is surrounded by more than eight roadblocks, more than Nairobi itself. You know, a lot of youth here work in Nairobi.

“We have done the math on matatus. Limuru has 200 matatus ferrying people to Nairobi and back every day. So, I have a question.

“My question is, there are 6,000 people travelling from Limuru to Nairobi every day. If they stop making the trip, does it mean that we should expect 6,000 job losses?” posed Robert Githiri, a local businessman.

Watch a report on the situation below:

US Says China Will Pay For the Pain They Have Caused