Just hours after staging a celebration on her win against MCAs, Kirinyaga Governor Anne Waiguru received mix reactions, with Kaurua taking to her social media pages to laud the effort of Members of County Assembly in their attempt to oust the county boss.

“Congrats Kirinyaga County Assembly, you raised the bar of accountability high by doing what the constitution and the laws mandate you to do,” she wrote on Twitter.

The Kirinyaga County Assembly voted on  Tuesday, June 9, to impeached Governor Anne Waiguru with 23 ward representatives supporting the motion anchored on violation of the Constitution, abuse of office and gross misconduct. Four MCAs abstained and six of the 33 ward reps were absent.

She was however cleared on Friday, June 27 after the 11- member Senate committee found that two charges against the governor including gross violation of the constitution and abuse of office and gross misconduct were not substantiated.

The Narc-Kenya Part Leader urged the Kirinyaga Members of County Assembly to continue safeguarding the interests of residents in the county.

On Friday evening, Karua argued that the senate’s decision to clear Waiguru had thrown Kirinyaga residents under the bus after they impeached Waiguru on Tuesday, June 9.

The Ward Representatives had slept at the county assembly and 23 of them supported Waiguru’s ouster.

However, Waiguru has since stated that she has forgiven the MCAs who orchestrated the plot to impeach her in a statement sent to newsrooms on Saturday, June 27.

“It is profoundly clear that this impeachment process did not meet the required threshold and that it was all a choreographed plan of events that was aimed at tarnishing my name.

“BUT as I said before, I forgive the forces behind it. The report’s findings did indeed reveal areas of improvement in administration by officers and need for better checks and balances,” she wrote. 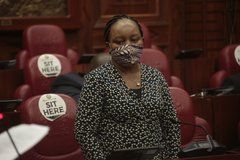