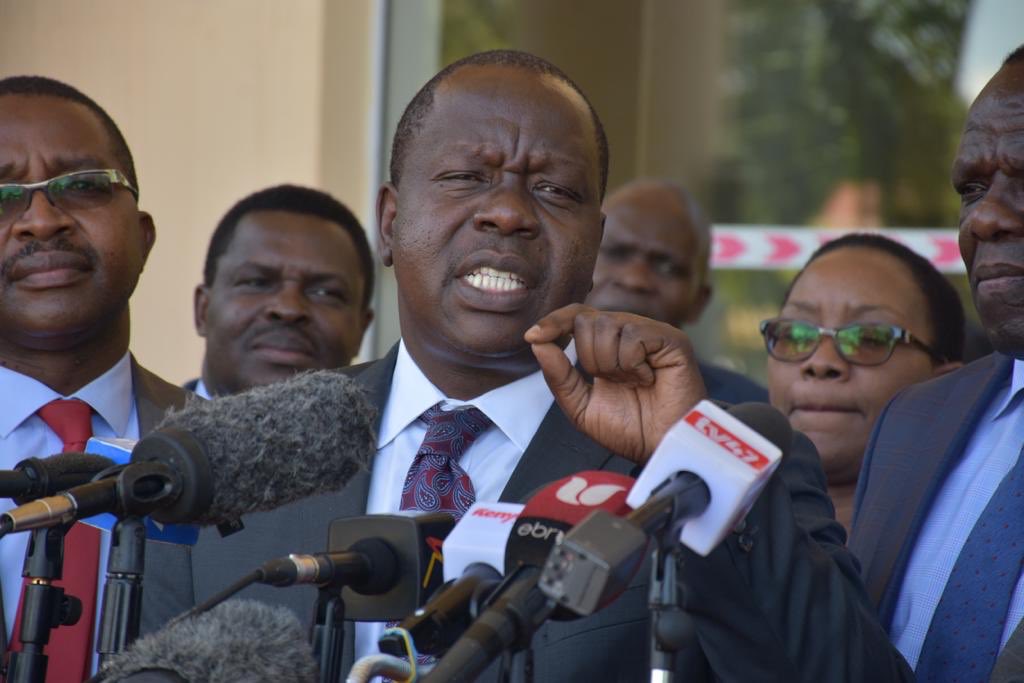 Interior CS Fred Matiang’i addressing the press after a meeting with Governors on Thursday, February 20, 2020.

Interior Cabinet Secretary Fred Matiangi on Wednesday, April 22, ordered for a partial lockdown of Mandera County following the rise in confirmed Covid-19 cases in the region.

“That there be cessation of movement by air and road into and out of Mandera County for an initial period of 21 days, commencing 7 p.m. today, 22nd April 2020,” Matiang’i stated in a statement.

The CS issued the directive after the county had recorded several Covid-19 cases, with Governor Ali Roba calling upon intervention by the national government to tame further infection. 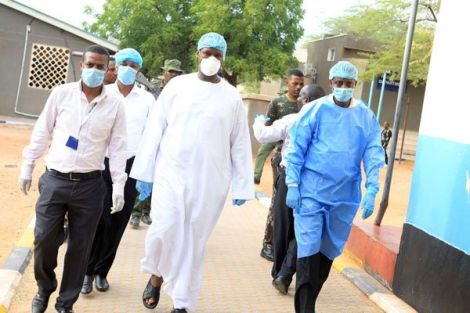 Mandera Governor Ali Roba (centre) and members of the county’s medical team are pictured at the Mandera County Referral Hospital on April 1, 2020.

The order was proceeded by the daily Covid-19 brief by Health CS Mutahi Kagwe, who confirmed a further 7 new cases in the country from 707 tested samples in the last 24 hours.

“The government has today directed restriction of movement inside and out of Mandera County,” announced Kagwe after the total cases in the county rose to 8,” Kagwe stated.

Kagwe in his address warned members of the public against escaping from quarantine facilities and urged those with knowledge of escapees to present it to relative authorities.

Mandera was the first county in the country to report that quarantined persons had escaped from isolation facilities.

Governor Roba had on Thursday, April 9 ordered a lockdown in the county after 30 people were quarantined, with 2 testing positive for the virus.

He had argued that the county ought to take action early, if the fight against Covid-19 was to yield success.

“Covid-19 doesn’t spread by itself but through the movement of people. As such we are left with no choice but to order a lockdown within the county,” Roba had stated.

Kagwe in his presser noted that the World Health Organisation (WHO) projections of millions of infections in Africa was probable considering how the cases multiplied in Somalia and Tanzania.

“As a government, our planning and actions are informed by global trend and our own analysis. A slight lapse in behaviour could roll back the gains we have made this far. This disease is calling for our total undivided commitment and unity,” Kagwe stated.

He further announced that the country had acquired 25,000 mass testing kits and the state was targeting to test 250,000 people by end of June. 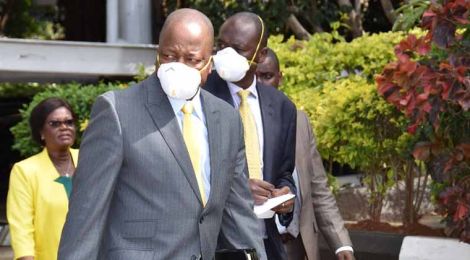 Some are rough and rude! Kate actress reveals the reasons for being a snob to her fans

Dryness achia deserts: Tips on how to make your man teleza kama nyoka pangoni during lungula