On Monday, August 31, while speaking in Nyamira County, Matiang’i stated that the head of state was mentoring him for the top seat and hinted at Kenyatta naming him as a surprise candidate.

Speculations have always been rife on whether Matiang’i would be fronted by Kenyatta. His colleagues in the Cabinet have also not shied away from lauding his leadership and administration skills.

“I am like a little child who is being helped to cross a road. I only need your prayers as God holds my hand to help me cross over. I have been tipped for greatness in the country and I need your full support.

“Our President is full of promise to our community and at an opportune time, he is going to surprise people,” the CS stated.

If he indeed is chosen, Matiang’i will battle it out with Deputy President William Ruto, Makueni Governor Kivutha Kibwana and Amani National Congress leader Musalia Mudavadi in 2022 among other interested candidates.

ODM leader Raila Odinga has so far declined to comment whether he will join the race for a record fifth time.

The CS has always been criticised by DP Ruto allies who have constantly accused him of undermining Ruto. Matiang’i was blamed for Ruto’s woes by allegedly launching investigations through the Directorate of Criminal Investigations (DCI).

Ruto has also spoken out against the DCI and the ‘deep state’ and ‘the system’, which he alleged are poised to interfere with the 2022 election by either locking him out of the race or tampering with the results.

The issue was aggravated when President Uhuru Kenyatta cut off DP Ruto’s powers through an Executive Order. The head of state scrapped off the Office of the Deputy President. He also barred Ruto from launching and inspecting projects, delegating the role to Cabinet Secretaries.

Kenyatta also appointed Matiang’i as an overseer of the Cabinet and had other CS report to him. This move by the President made the CS a punching bag by Ruto allies who accused him of foul play and trying to manoeuver his way into State House.

On Thursday, August 20, the Interior CS refuted allegations that he harboured ill-feelings for the DP. He spoke against reports which alleged that he called for DP Ruto’s resignation. 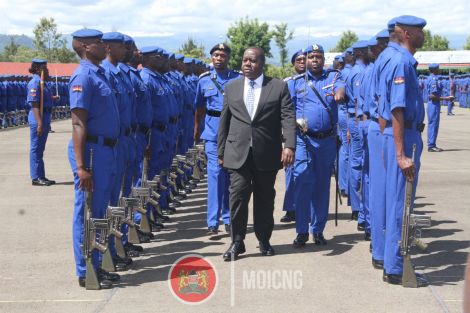 Interior Cabinet Secretary Fred Matiang’i inspects a guard of honour during a passing out parade for 1,224 officers in December 2019