Addressing the media on Thursday, May 28, the leaders’ of outfit ‘Okoa Mombasa’ faulted a directive by the government for all transit cargo destined for Uganda, Rwanda and South Sudan to be transported by Standard Gauge Railway (SGR) to Naivasha or Metre Gauge Railway to Tororo/Kampala.

Muslims for Human Rights (MUHURI) chairman Khelef Khalifa argued that moving port operations would leave Mombasa Port as nothing but a transit zone. 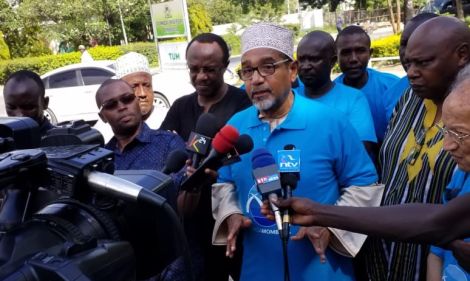 “The directive is giving the SGR an unfair advantage. What we are asking is for transporters to be given an option if they want to transport their goods via road, let them be allowed.

“The SGR project was driven by political reasons, not economical reasons, everything is shrouded in secrecy and has cost so much money,” Khalifa stated.

He added that the President was breaking the law by instituting policies that were undermining people’s personal businesses and would cost the locals their jobs at the port.

Khalifa further called out politicians in the Coastal Region who weren’t vocal on the issue, stating that they would resist any attempt to push for the Building Bridges Initiative (BBI) in the region.

“If you will not represent the interest of the people at the Coast, we are not going to support the Building Bridges Initiative,” he stated.

Transport CS James Macharia had earlier in May, announced that all transit cargo be railed to the Inland Container Depot (ICD) at Naivasha before being collected by trucks to the partner states via Busia or Malaba to reduce human movement.

“Fuel products will be transported by pipeline to Kisumu and thereafter by lake Victoria to Port Bell or Jinja,” he stated.

The Mombasa residents in 2019 held protests over the Naivasha dry port arguing that the county’s economy would be affected by the reduction of port services.