Mvita MP Abdulswamad Shariff Nassir on Tuesday, April 28 spoke to TMZ.co.ke and broke down his plan to push for the waiver of all fees demanded from individuals in government-designated quarantine facilities across the country.

Describing the mandatory fees as ‘unfair’, Nassir, however, asserted that his proposed waiver would not apply to those taken to quarantine centres for flouting various government directives on Covid-19.

He spoke after paying a visit to the quarantine facility at the Kenya Medical Training College (KMTC) in Mombasa where, through the Shariff Nassir Foundation, he partnered with donors to supply those at the facility with three decent meals a day for the next 45 to 60 days. 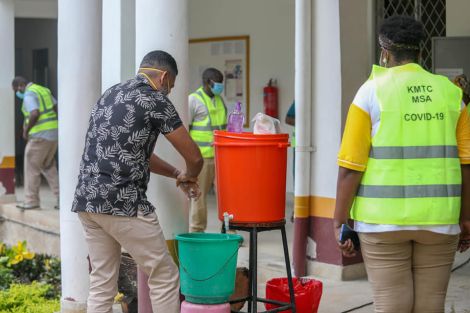 Mvita MP Abdulswamad Shariff Nassir washes his hands at the Kenya Medical Training College (KMTC) in Mombasa during the launch of a sensitization campaign on April 28, 2020.

“I think in this situation, if you’re telling people they have to pay, it’s very unfair, unfortunate and backward.

“You’re telling someone to pay because they came into contact with an infected person. They might have been at the supermarket or going about their usual activities when they were exposed, but you want them to pay, it’s a bit disturbing.

“I will be pushing in Parliament for the government to withdraw these charges entirely, but you should note that this will not apply to those found breaking the law,” he asserted.

Abdulswamad revealed that he would also be pushing for the national government to offer subsidies to institutions such as KMTC which have been running the quarantine facilities, observing that they were feeling the financial burden as the country responds to Covid-19.

Explaining his decision to find ways to provide food at KMTC Mombasa for the duration of the quarantine period, Abdulswamad stated that such institutions had been seriously impacted by the pandemic.

“What we’re trying to do is to ease the pressure on these institutions, which is why we’ve made arrangements for them to be receiving food items.

“But I also think it’s important for the national government to provide certain subsidies for the institutions,” he noted.

Nassir revealed other measures he was implementing to protect his constituents as the shocks of the pandemic continue to be felt.

On April 22, for instance, he earned plaudits after inking a deal with the National Health Insurance Fund (NHIF) to provide medical cover for 2,000 vulnerable families in Mvita Constituency.

The deal funded by the National Government-Constituency Development Fund (NG-CDF) is worth around Ksh12 million.

The insurance program covers, among other ailments, Covid-19, Cancer, x-ray, and dialysis; both inpatient and outpatient.

The lawmaker also donated his entire salary to support efforts to combat the virus in Mombasa County and is behind a proposed bill pushing for the waiver of all electricity bills for Kenyans during the Covid-19 period. 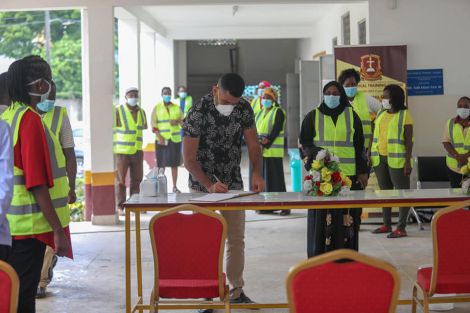 Mvita MP Abdulswamad Shariff Nassir pictured at the Kenya Medical Training College (KMTC) in Mombasa during the launch of a sensitization campaign on April 28, 2020.