TNA, the party that propelled President Uhuru Kenyatta to State House, folded into Jubilee Party in 2016 along with other outfits including the United Republican Party (URP), New Ford-Kenya and Tip Tip.

Having made no secret of his intention to run for President and win in 2022, Mudavadi noted that he hoped to work with the former TNA officials from Nyeri County to woo the vote-rich Mt. Kenya region.

“We exchanged notes on a number of areas related to the 2022 succession politics and how to get my message to the larger Nyeri County ahead of the 2022 political realignments,” Mudavadi noted after the meeting. 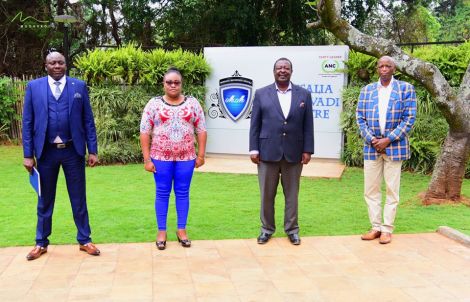 Leaders from various political parties and groupings have been flocking to the Musalia Mudavadi Centre in recent weeks.

In an interview on Thursday, July 2 with former Milele FM presenter Felix Odiwuor alias Jalang’o, he explained that he was welcoming leaders and citizens from across the country to build broad-based national support for his 2022 presidential bid.

Mudavadi reiterated that he had no intention of engaging in regional supremacy battles with other leaders from Western Kenya for the title of ‘Luhya Kingpin’.

He disclosed his hope that Kenyans would trust him to revive and grow the economy, reiterating that job creation and debt management was at the centre of his agenda.

“We should be debating in this country about how much are we putting into healthcare vis-a-vis agriculture and why.

“How much are we putting into infrastructure and why? If we say we have provided electricity to 7 million homes, on this other side you see only 2 million homes have been connected to water directly.

The ANC leader further dismissed the emerging ‘Hustlers vs Dynasties’ ideology which he described as bad politics.

“Let’s look at Covid. One of the most essential things to fight Covid-19 is water and soap. Instead of focusing there, you want to focus on Musalia’s lineage?” he posed.

10 Types of Cyber Crime You Should Be Aware Of