Skip to content
News Politics
September 4, 2020 tmz editor
Jubilee Vice Chairman David Murathe arrives at Nyayo Stadium ahead of Jamhuri Day celebrations on December 12, 2019
TWITTER
Jubilee Party Vice Chairman David Murathe arrived at the EACC offices in Madison House, Upper Hill, Nairobi on Friday, September 4 with the aura of a man without a care in the world despite the accusations leveled against him.

In a video seen by TMZ.co.ke, he was driven in a black Toyota Prado with civilian number plates and was received by a multitude of journalists who had been waiting since morning.

On alighting, he was greeted to the sound of shuttering cameras as journalists clicked away to capture the highly anticipated arrival.

“Where are your masks? Where is yours?” he asked pointing to one of the reporters to break the ice. “Are they part of the scam?” he added as the reporters burst with laughter.

As though he had never been there, he asked where the entrance was and a cheeky journalist shouted “This way sir” before an officer showed him the way.

“Huyo ni mkora (That is a naughty one),” he responded as journalists followed closely behind in their clicking frenzy.

Murathe stopped halfway to observe the over a dozen cameras that had been pointed at him before quipping “Kwani ni drama ama ni video (Why is this so dramatic)?”

The Jubilee vice chair had been summoned after he was linked to Kilig Limited which was reportedly involved in the KEMSA scandal.

During an interview on Tuesday, September 1, Murathe confessed that he was an acquaintance of one of the directors of Kilig Limited.

The KEMSA scandal is being investigated on four fronts, even as the complexity of the probe threatens to delay the closure past the 21-day deadline given by President Uhuru Kenyatta on August 26. 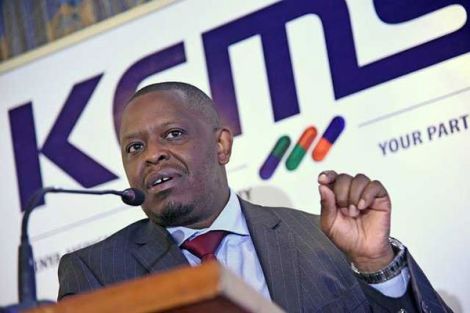