Skip to content
Exclusives Politics
May 3, 2020 admin
Gladys Wanjiru (left) and feeds her husband Elgeyo Marakwet Senator Kipchumba Murkomen with some cake during his birthday party on March 12, 2020.

Elgeyo Marakwet Senator Kipchumba Murkomen, on Saturday evening, May 2, revealed his intention to seek the highest office in the land.

Taking to his social media pages, the vocal senator shared a quote and a photo in which ‘I can be president’ was emblazoned and highlighted using red markings.

“Some men see things as they are, and ask why. I dream of things that never were, and ask why not.” Murkomen stated, while quoting Robert Kennedy  – an American politician and lawyer who served as the 64th United States Attorney General from January 1961 to September 1964.

The Majority Leader of the Senate announced his entry into active politics in remarkable fashion, having trumped the powerful Nicholas Biwott and several other veteran politicians in the 2013 general elections. 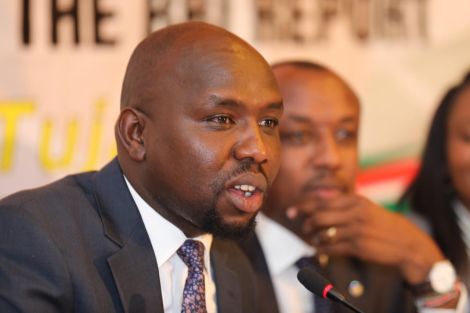 Elgeyo Marakwet Senator Kipchumba Murkomen during a meeting of the BBI committee at Laico Regency on Tuesday, March 10, 2020.

In 2017, his re-election was almost a formality, as he easily beat is direct competitor, David Kimaiyo, who had previously served as the Inspector General of Police.

The senator’s journey into becoming an active public figure started as far back as his time at the University of Nairobi, where during his second year in pursuit of a Bachelors Degree in Law, he was elected as Chairman of the law society of Kenya.

An ardent supporter of Deputy President William Ruto, Murkomen is renowned for his habit of speaking his mind, with total disregard to the occasion, ruffling some feathers in the process.

On January 8, while speaking in Nyeri, he warned President Uhuru Kenyatta that the Jubilee Party was their decade-long investment and that they were all hitched to it until 2022.

“For those of you that thought we’d be leaving the party, you have another thing coming, we have put our own political investment on Uhuru Kenyatta for over 10 years,” he stated at the time.

Having already served his two terms as a Senator in his home county, it is inevitable that Murkomen will be going after a new seat in 2022.

He has been at loggerheads with his county governor -Alex Tolgos, ever since the Ksh63 billion Arror and Kimwarer dams project stalled and turned into a national saga riddled with corruption allegations.

The scandal, which led to the arrest and suspension of Treasury Cabinet Secretary Henry Rotich and his Principal Secretary Kamau Thugge as well as several officials of the Kerio Valley Development Authority, is now a matter before court. 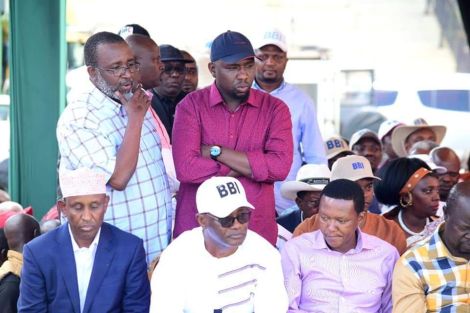 Meru Senator Mithika Linturi (standing on the left) pictured alongside Elgeyo Marakwet Kipchumba Murkomen at Kinoru Stadium at the BBI rally on February 29, 2020.