In a detailed statement, the former majority leader stated that the amendment which was signed into law by President Uhuru Kenyatta actually sought to protect the MCAs from being ejected for frivolous reasons.

He explained that most of the grounds under which the MCAs could be recalled existed in law since 2012.

Murkomen argued that in 2012, the national assembly passed the County Government Act which had sections dealing with the removal of the MCAs. In 2016 the Katiba Institute went to court to invalidate the above sections and to make it easy for MCAs to be removed. 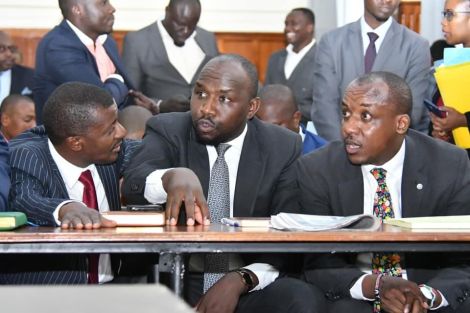 “As a result the High Court in 2017 declared some of the sections unconstitutional. Key among them is section 27(2) which deals with grounds of recall. As a result of the decision, MCAs were exposed and anyone would initiate their recall without giving any reasons,” he argued.

The Jubilee Senator added that the amended law he initiated was to ensure that the grounds for removal met the constitutional threshold to protect MCAs.

The other amendment was to ensure the petitioner is a voter in the respective ward.

He clarified that a false impression has been created that he had sponsored the whole law noting that some MCAs were lashing at him without knowledge of the amendment.

“I have realized that some MCAs even those who are serving the second term have not read the County Government Act yet it is the basic law that together with the constitution and the standing orders control the daily operation of MCAs and the County Assembly,” he noted.

The conduct of MCAs has come into question as fistfights and physical altercations have been reported in various assemblies across the country during sessions.

In 2019, Nairobi MCAs faced off against Speaker Beatrice Elachi physically trying to eject her from her office.

Also, the issue of impeachment of Governors by the MCAs has been brought to the foreground with the recent incident of Kirinyaga Governor Anne Waiguru and the failed plot to eject Kitui Governor Charity Ngilu.

Turning in his grave! Fidel Odinga Road to be renamed

Parents Ask Magoha For Clarity on Fees After Reopening Suspension