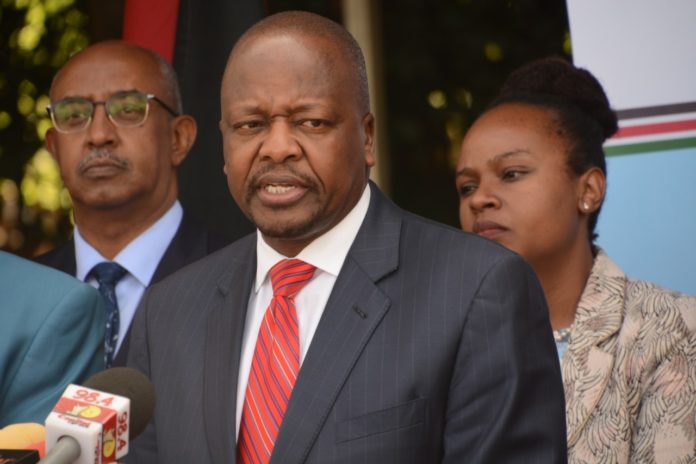 Mutahi Kagwe is a tenured Kenyan politician born in 1958 in Mukurweini, Nyeri county. The
current health Cabinet Secretary has been in the political arena for almost 2 decades and has served in various dockets.

Career
From 1987- 1989, he worked as an Advertising Manager for the Standard Limited and was
promoted to commercial manager in 1989 till 1992. Later, he launched a small publishing house then a public relations company.

Political career
The nominee decided to take a plunge into politics in 2002. He became the fifth member of
parliament (MP) for Mukurweni Constituency from 2002-2007. At the time, he was the
chairman of parliamentary committee on finance, trade, tourism and planning.
The gods smiled at him once again when the former president, Mwai Kibaki, appointed him the cabinet minister of Information Communication and Technology. It was during his stint as the ICT minister that TEAMS ( Transformational East Africa Marine System), the first Fibre Optic Project for East Africa was launched. This leas to increase in internet speed and forever change Kenya’s communication system. The first-ever mobile money transfer, Mpesa was also launched during this period.

After losing his Mukurweni seat to Kabando Wa Kabando in 2007, he vanished from politics
only to make a comeback in 2013. The former ICT minister ran for Senate under the National Rainbow Coalition (NARC). He triumphed thus becoming the first senator of Nyeri and chairing the Senate committee on Information and Technology and also serving on the Senate Committee of Finance and Budgeting and the Liason Committee. The former senator also championed “ The best classrooom”, a program that aspires to promote quality ECDE education countrywide.
In 2017, he went MIA again after competing for the Nyeri gubernatorial on a jubilee ticket and losing.
In 2019, he resurfaced again after being appointed to the Board of Energy and Petroleum
Regulatory Authority ( EPRA). He took the mantel at the expense of Dr Macharia Irungu, whose position was revoked by Charles Keter, Cabinet Secretary for energy.
The veteran politician struck a pot of gold once again when President Uhuru appointed him the cabinet secretary for health. On February 28 th 2020, he took his oath of office. The health Cabinet secretary has become very popular as his appointment comes in the wake of the global pandemic, Covid-19. He is on the media almost everyday advising the nation on how to deal with the virus. One of the rules he gave was for public service vehicles to reduce passengers and people to stay one meter apart.

Family
Not much is known about his children but he is married to Anne Wanjiku Mutahi.

Net Worth
Mr. Kagwe&#39;s net worth is estimated to be more than 667 million Kenyan shillings. The 68-year-old own a fleet of posh cars and luxurious bungalows. He is also the proud owner of two companies that generate more than 5 million Kenyan Shillings annually:

15 Counties Expected to be Hit by Strong Winds – Weatherman

Beauty reloaded! Throwback photos of Grace Msalame back in the day wow many