Nairobi County Health Services Executive Hitan Majevdia has dismissed claims that a zoom meeting of the Senate Health Committee  on June 9 had to be stopped because he was drunk and wore a bathrobe .

Speaking to TMZ.co.ke, Majevdia denied being drunk and stated that he has never taken alcohol in his life, not even a glass of wine.

Trans Nzoia Senator, Michael Mbito, the committee chair, had ordered the CEC to leave the meeting immediately making reference to his dressing.

He explained that he was not dressed in a robe as alleged but dawned an indian attire. 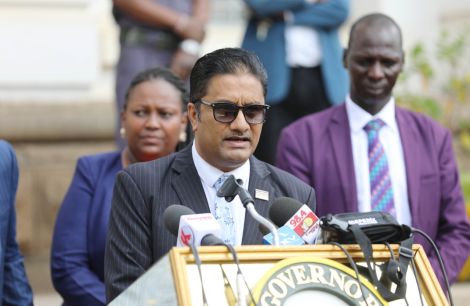 “I was not in a robe. I wore a pashmina shawl. The fact that it was maroon in colour made people think that it is a bathrobe,” the CEC explained.

He went on to confirm that the zoom meeting went on as scheduled.

The Nairobi County Government  and Nairobi Metropolitan Services were invited by the Senate Health Committee to respond to queries by the Auditor General on the expenditure of Covid-19 funds used by county governments in the Special Audit Report.

The committee inquired about the whereabouts of other members from the county government including Deputy Governor Anne Kananu who were absent.

County Secretary Justus Musumba responded saying that he had not received an official invite for the meeting.

“I wrote to the clerk of the health committee on whether the county government should appear but did not get any response,” Musumba stated.

In August 2018, Hitan and the then County Health Director were suspended by then Governor Mike Sonko over poor health conditions in Nairobi County.

You Will Burn in Hell – Moses Kuria Rants Over Eviction of 7,000 Families