On Tuesday, June 16, National Super Alliance (NASA) and the majority of Jubilee Senators aligned to President Uhuru Kenyatta voted for the committee which was given approximately 10 days to decide Waiguru’s fate. 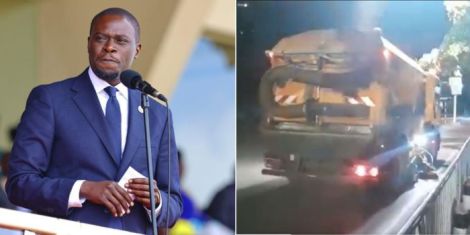 During the Senate session, he further differed with Makueni Senator Mutula Kilonzo who violated a standing order and made unsubstantiated remarks on a corruption case facing Waiguru, forcing Murkomen to interject.

“A Senator shall be responsible for the accuracy of any facts that the Senator alleges to be true and will be required to substantiate any such facts instantly. Let us maintain the integrity of this house. If such a statement cannot be substantiated, my brother Mutula kindly withdraw and apologise,” Sakaja stated as Mutula withdrew.

However, Sakaja lost his bid to have the plenary discuss Waiguru’s impeachment as 45 voted in favour of the committee against 14 who were opposed to it.

On Thursday evening, June 11, he had vowed to ensure that Waiguru’s impeachment case would be handled by a full house, similar to former Kiambu Governor Ferdinand Waititu.

“I said these words emphatically on the 21st of January about the Kiambu impeachment. My principled stand remains the same. Plenary is the way. Consider a committee of 11 members, if that committee feels that a matter is not substantiated, it dies there.

“That means on such a matter of great magnitude where not only is the interest o Kiambu being looked at, but also of the senate, 6 members (majority) can stop that process tomorrow. If it comes to the plenary, where all of us can sit in, it will take 24 county delegations to make a decision,” Sakaja posted on his social media pages.

Waiguru will be tasked to clear her name with the 11-member Senate committee. A report by the Public Procurement Regulatory Authority (PPRA) detailed the Governor will be tasked with explaining Ksh 92 million procurement irregularities which led to her impeachment.

She will be grilled on Ksh 8 million allocations to a private company, Ksh19 million tender for the upgrading of Kagumo Market and purchasing a Toyota Land Cruiser Prado at Ksh14.5 million and Ksh 50.6 million upgrade of a hospital information system.

Kirinyaga Governor Anne Waiguru addresses the media after inspecting the construction of Ndaba dispensary, Kirinyaga on May 6, 2020

Murkomen, Kihika Hit Out at Kang’ata Over Senate Impasse