Skip to content
FACTS Politics
May 13, 2020 admin
Traffic police officers stop motorist at a checkpoint. On Wednesday, May 13, 2020, NTSA issued a warning to motorists.

The National Transport and Safety Authority (NTSA) on Wednesday, May 13, issued a fresh warning to motorists over illegal signage.

In the statement, NTSA singled out pickups that displayed ‘WIDE LOAD’ on the front or rear part of the vehicle.

“Our attention has been drawn to the widespread display of  ‘WIDE LOAD’ signage on the front and rear of pickups either when the load carried does not exceed the overall allowed width or when not carrying any load contrary to the provisions of the law,” the statement reads in part.

Owners of such vehicles were directed to Section 3 (a) of the Traffic Act Cap 403 and warned against displaying the signage. 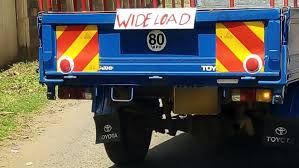 “Owners of pickups whose dimensions do not fall within the category specified by the law either loaded or unloaded are therefore warned against displaying the ‘WIDE LOAD’ signage,” reads the latest statement from the NTSA.

“The required maximum overall width of a motor vehicle together with any load projecting beyond the overall width of the vehicle shall not exceed 2.65 metres,” reads Section 3 (a) of the Traffic Act Cap 403 in part.

“It is not a requirement for a pickup vehicle to have the wide load signage when on the road, not unless the vehicle is transporting a wide load as specified in Traffic Act (CAP 403),” Njogu said.

He further explained that trucks used to transport abnormal loads have their chassis, trailer, axles, tyres and trailers customised to suit the specific need of the consignment depending on their length and weight.

Abnormal cargo, according to the KeNHA Regulations 2013, is cargo that exceeds the legal load or dimensional limits under the Road Traffic Act.

The allowable axle load limit on roads in the six-nation East African Community is 56 tonnes, with additional cargo attracting an overload penalty. 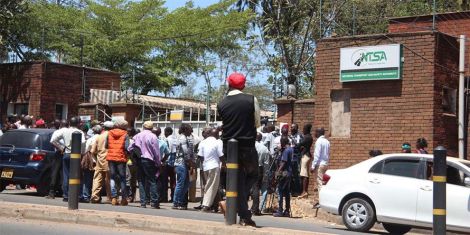 A crowd outside the National Transport and Safety Authority when detectives raided the premises on January 30, 2019
DAILY NATION