Babu, on his social media platforms, declared that he had become the president’s number one loyalist after Uhuru heeded to an appeal to issue title deeds to Embakasi residents after 45 years.

“Uhuru Kenyatta is the best president Kenya has ever had…for heeding to my appeal to issue title deeds to residents of Embakasi East. Our people have struggled with the uncertainty of ownership of land where they have lived for over 45 years. 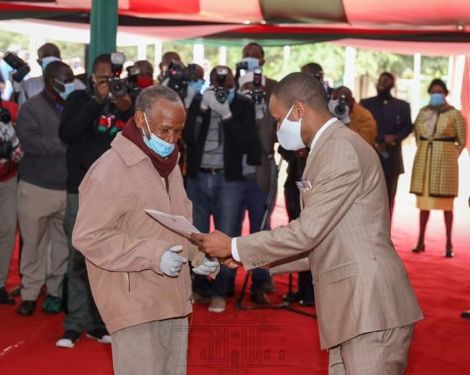 “Through the President’s kindness, this uncertainty ended today and I am deeply humbled and grateful for this. Mr. President, we will continue praying for you for God to give you long life and good health so that you may govern in wisdom! Uhuru Kenyatta tosha, tano tena!” he concluded.

In his speech, the president stated that he was focused on ensuring bonafide landowners received valid title deeds.

Additionally, he urged landowners not to sell their land but to invest in avenues that would be profitable in the future.

The president was speaking during the issuance of title deeds to residents of Embakasi, Korogocho, Tassia and Mbagathi.

Owino’s sentiments are a clear indication that there are no permanent enemies in politics.

The Embakasi East MP was a fierce critique of the president before the handshake between him and opposition leader Raila Odinga.

In September 2017, the MP was arrested after he allegedly insulted the head of state by calling him unprintable names.

His sentiments had led the president’s supporters to stage protests along Thika Road at Githurai, Juja, Thika Town, Githunguri, Limuru, Githurai, Ruiru, Gatundu and Kiambu town calling for his arrest.

Owino, however, maintained that he had not mentioned anyone’s name when he made his utterances.

“I will not apologize to anyone because I called nobody’s name during my yesterday’s address.