Skip to content
News Politics
July 30, 2020 tmz editor
MCAs exchanging blows at City Hall on Tuesday, July 28, 2020 (left) and Speaker Beatrice Elachi.
Citizen TV anchor Sam Gituku put Nairobi Speaker Beatrice Elachi on the spot with an audio recording of a woman who was inciting police officers to rough up Members of County Assembly in the chaos that ensued on Tuesday, July 28, at City Hall.

In an interview with Elachi on Thursday, July 30, Gituku outrightly asked the speaker if she was the one inciting the officers to strangle her colleagues and to an extend, shoot them.

“I have reason to believe it’s your voice saying, “Nyong’a kabisa, perfect, piga risasi” why would you be leading chaos happening in the house?” Gituku asked.

Taken aback by the question, the speaker stated that she was in her office as the police tried to disperse the crowd, adding that her voice was not as loud.

“I have been on your show many times and I don’t think that I can be there leading saying ‘Piga risasi’. How will you capture my voice and yet I was in the office,” she stated.

Elachi further stated that she did not recognise the woman’s voice on the recording.

“Is this how low you have seen me? That I can really come out and tell the policeman ‘piga kabisa, piga risasi’?” she questioned.

Elachi’s sentiments came days after a section of MCAs stormed City Hall demanding to serve Elachi with an impeachment notice signed by 59 members.

During the entire scuffle, Elachi had allegedly locked herself in her office and officers barred the MCAs from accessing it.

To disperse the crowd, police lobbed teargas at the lawmakers as well as clobbered some of them, leaving Mlango Kubwa MCA Patricia Mutheu injured.

Accusations levelled against Elachi included; victimisation of MCAs and assembly staff, impunity, disregard for the law and county orders, and militarisation of the assembly.

Elachi maintained that governor Sonko was behind the impeachment motion and that he hired “young men” to disrupt the operations of the city, and at the same time, used MCAs to stall operations.

“Instead of bitterness and fuelling confusion that no one understands, just sit down and use the law, not everyday hiring people to disrupt the assembly sittings,” she stated. 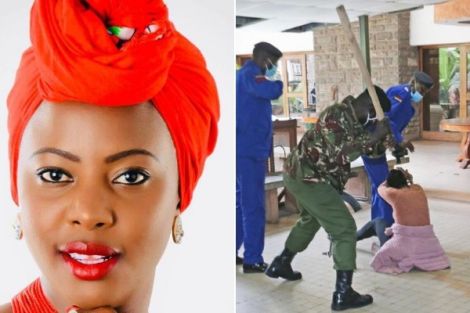 Kipchoge: How I Spend My Hard-Earned Millions