The letter, which surfaced on Monday, May 4, and bearing Siaya Senator James Orengo’s signature, claimed that it would withdraw its membership from the County Public Accounts and Investments Committee shortly after Olekina’s win.

“I express and register dissatisfaction with the conduct and outcome of the elections of the leadership of the County Public Accounts and Investments Committee which were purportedly done today.

“We intend to withdraw our membership from the said committee until an appropriate resolution a be made,” the letter reads in part. 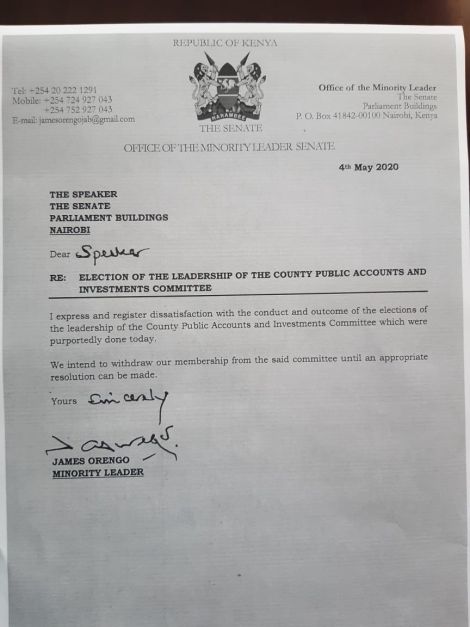 A letter purported to have been authored by James Orengo disputing Ledama Ole Kina’s election in the Senate on Monday, May 4, 2020.
TWITTER

The senator allied to Jubilee Party was unveiled as the new chair of the committee taking the reins from Homa Bay Senator Moses Kajwang.

In his reaction, Ledama accused Raila of having a hand in the developments despite him supporting the former premier in the past.

“Raila Odinga is on the record stating that his election has been stollen and I supported him. I was nearly killed in the last Resist Movement!

“Now, what exactly does this letter mean? James Orengo, are they trying to steal my chair position! No way! I am a wrong number to mess with!” he stated.

‘They blocked me for calling them out!’ Kenyan exposes Eldoret club for hosting party