Skip to content
Exclusives Politics TOP STORIES
May 26, 2020 Judy Karanja
Malindi MP Aisha Jumwa in court in October 2019 after being charged with murder and incitement to violence

Jumwa, elected under an ODM ticket in 2017, declared her loyalty to Deputy President William Ruto, constantly launching attacks at Odinga and President Uhuru Kenyatta. She has also, numerously criticised the handshake and the Building Bridges Initiative (BBI).

A report by People Daily on Tuesday, May 26, detailed that ODM was targetting the vocal Coast legislator in the looming purge headed to Parliament. 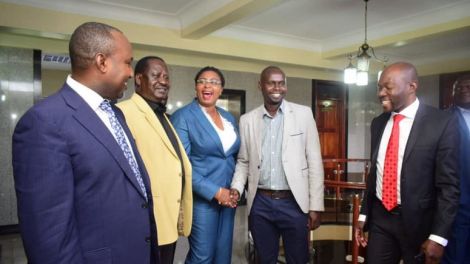 “So, we are likely to work with Jubilee very closely in ensuring that we bring changes to any organ including the Parliamentary Service Commission.

“We know that one of the commissioners who is sitting in PSC and is from ODM has not been supportive of the party’s agenda. In fact, she is behaving as if she has literally left the party,” ODM Chairman John Mbadi stated.

The Suba North MP reiterated that allegiance was crucial in politics and in party leadership, adding that open defiance was cause for being ousted.

“Party loyalty is very important. Those who are not interested in following the party which has assigned them critical functions is outright defiance.

“The party has to appoint you to that position. Why would the constitution give the party responsibility and when you get to that position, you start defying that party? Those who have been appointed to that commission cannot just behave as they wish. I think they will be in for a rude shock,” Mbadi declared.

“We will seize every opportunity to bring the reforms we have been yearning for at this moment when there is still a working relationship between the two leaders,” the source intimated.

Jubilee Party, as revealed by Senate Majority Chief Whip Irungu Kang’ata, has also set eyes on kicking out Kericho Senator Aaron Cheruiyot from the PSC. Cheruiyot was accused of betraying the party after he voted against the ouster of Tharaka Nithi Senator Kithure Kindiki as Senate Deputy Speaker on Friday, May 22.

“I had written a letter to each and every senator urging them to support the party. Even in the National Assembly, top leaders or committee chairs who are not doing that which they are expected to do to ensure the legacy of President Uhuru Kenyatta is engrained in this country, are also going to be purged,” Kang’ata stated in an interview with Citizen TV on Saturday, May 23.

Painful! daughter of Rev Kaniah who succumbed to Covid19 shares letter she wrote on his birthday at his funeral