Skip to content
News Politics TOP STORIES
May 15, 2020 tmz editor
From left: DP William Ruto, Kapseret MP Oscar Sudi, Elgeyo Marakwet Senator Kipchumba Murkomen and Governor Alex Tolgos at an event.
Since the ejection of Elgeyo Marakwet senator Kipchumba Murkomen as the Senate Majority leader, a number of leaders allied to Deputy President William Ruto have come out to give their version of events.

The most recent leader to break his silence is Kapseret MP Oscar Sudi who revealed that Ruto made frantic efforts to save Murkomen from the Jubilee axe – an exercise that ended in futility.

Speaking in a phone interview with Chamgei FM, the Jubilee MP stated that upon learning of the meeting, the Ruto-allied legislators embarked on a mission to stop the removal by ensuring the team at State House did not meet the threshold to eject the leaders.

Nakuru Senator Susan Kihika had drafted a protest letter and together with Kericho Senator Aaron Cheruyiot, Sudi began to mobilise their allies to sign it.

The plan was in high gear only for a glitch to present itself in two leaders Nandi Senator Samson Cherargai and Uasin Gishu Senator Margaret Kamar.

According to Sudi, the politicians were nowhere to be seen on the very day their loyalty to the DP was needed the most as efforts to reach them to sign the document were futile.

“We were looking for Cherargai to sign the letter but he kept saying that he would come, which he did not,” Sudi explained.

It is at this point that he informed Ruto of what was going on, and the DP took matters to his own hands and decided to call the senator himself. 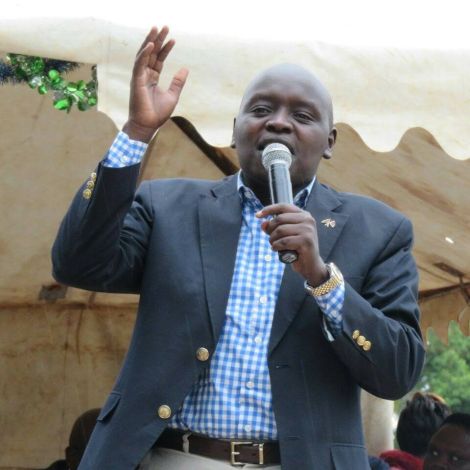 Nandi Senator Samson Cherargai during an address in 2019.

“I told the DP what was going on and Ruto called him himself. He called him (Cherargai) 22 times who kept assuring the DP that he would come,” Sudi stated.

At the end, the Nandi Senator sent his signature but did not physically show up when he was summoned by the DP.

As for Margaret Kamar, the Kapsabet MP stated that she only showed up the day after to sign the letter despite frantic efforts made by the team to reach her.

After the ouster, Kamar’s name was alleged to be among those who’d signed the State House list but the Ruto allies were determined to make sure she signed their letter as well.

Cherargai on Tuesday denied reports that he was on his way flying to Nairobi when he decided to turn back to avoid attending the Jubilee Senate Parliamentary Group meeting by President Uhuru Kenyatta.

He instead stated that he was in Nandi taking advantage of the rains by planting trees.

DRAMA! Sonko Initiates Move to Pull Out of Deal With Uhuru