In a deleted Facebook post, he claimed that he had the support of the head of state as well as that of Interior CS Fred Matiang’i even as the board that ousted him maintains that he was linked to corruption and nepotism.

“What will my detractors say? I remain committed to my country Kenya and able leadership under H.E. Uhuru Kenyatta!” He disclosed. 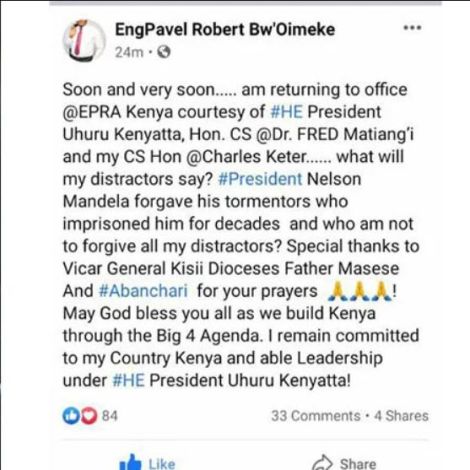 This comes even as the authority’s board finds itself in the crosshairs of the office of the Attorney General as a result of a petition it filed challenging the extension of Oimeke’s contract.

Since his appointment to the position in 2017, the CEO was eligible for a second term after his first run ended on August 1, 2020, but the board moved to court demanding the reappointment to be made procedural.

The AG claimed that the petition had been filed after Oimeke’s confirmation for another term and that the board never informed the judge.

“We are of the firm view that the action by the board to require the Director-General to step aside in purported compliance with the said court order was, with respect, ill-advised and an attempt to undo previous actions that had already been performed by the board and the Cabinet Secretary.

“As such, and from the totality of the foregoing, it is our considered opinion that the decision by the board to require the first respondent to step aside from his role as Director-General of EPRA is blatantly erroneous, based as it is on an ineffective premise – namely, an unenforceable court order,” read the advisory from AG in part.

The authority’s board resorted to suspending Oimeke after their meeting on August 14, 2020, following the petition.

Employment and Labour Relations Court Justice Hellen Wasilwa had earlier temporarily stopped the renewal of Oimeke’s term until the petition was determined.

Oimeke was replaced by Mueni Mutungá who took the position in an acting capacity.

The Energy and Petroleum Regulatory Authority (EPRA) is established as the successor to the Energy Regulatory Commission (ERC) under the Energy Act, 2019 with an expanded mandate of regulation of upstream petroleum and coal. 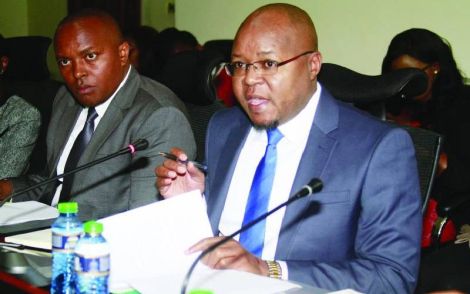