In a video that surfaced online on Tuesday, June 16, Kenyans in the Middle Eastern country shared the harrowing tales of how Njeri met her death.

“Rehab Njeri went to look for help at the Kenyan Embassy in Saudi Arabia and they took her to a hospital on March 15, this year. 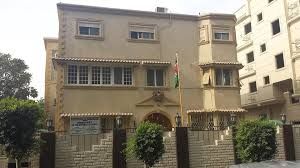 A file image of the Kenyan Embassy in Saudi Arabia.

“When she was discharged she was urged to have a Kenyan and after she got worse, the Embassy neglected her.
We have tried our best because the Government of Saudi [Arabia] needed a letter from the Embassy that we did not get,” complained a man in the video.

The man went on to claim that Rehab died because of inaction by Embassy officials as she has sought help to get help in her readmission to hospital.

According to the man, Rehab was subjected to inhuman conditions with temperatures peaking 45°C.

The man claimed that if the Embassy had offered a helping hand to Rehab she probably would not have lost her life.

“Let this be a lesson to others. We pled with the government because with their help she would not have died.
We finally got her admitted but she was in a really bad condition and died,” concluded the man.

A woman in the video urged President Uhuru Kenyatta to replace the Embassy officials after failing to cater for Rehab.

“I’m bitter because a Kenyan has died due to someone failing to sign a letter for one of its citizens to get medical help.

“We plead with the president to eject the Embassy officials and replace them with people who care and will cater for Kenyans,” urged the woman.

The Ministry of Foreign Affairs was yet to issue a statement in response to the claims with a representative promising Tmz.co.ke to send a response at 3 p.m. on Tuesday, June 16.

‘I used to walk commando, hizo enzi ‘ Size 8 talks on her past life in ‘sin’