A video circulating on social media showed the man walking around with a machete before being intercepted by security guards.

Speaking to Kenyans.co.ke, a security officer from Westgate Mall who sought anonymity detailed the incident and claimed that the man seemed ‘disturbed’. 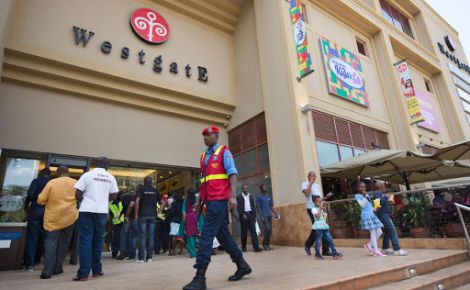 People going about their day to day activities outside the Westgate Mall.

“It was not a very alarming situation, the man looked like he was out of his senses according to how he was talking when we were interrogating him.

“He was not really threatening people but we took a precautionary measure because it is unusual to see someone walking around with a panga,” he noted.

The security officer noted that the man was taken to Parklands Police Station after the arrest for further interrogation on the incident.

Caleb Chuma who recorded the clip from the window of their office told TMZ.co.ke shared how the security officers from the mall disarmed the man.

“I do not really know what was happening, I just saw the man walking around with a panga which was unusual so I started recording.

“I think he was from around Westgate and was being trailed by the security. There was a private security guard and two uniformed police men,” he explained.

According to Chuma, pedestrians were scared of the man as he was walking around with the panga and one of the police officers sneaked in behind him to tackle him to the ground.

The other security officials rushed on to pin down the man before disarming him and taking him away for interrogation.

I wanted a truck to hit me along Waiyaki Way, Frankie never told me about Kwamboka’s pregnancy – -Maureen Waititu

‘My own mother didn’t greet me over fear of contracting Covid-19,’ says Jalango