In an interview on a Youtube channel on Friday, May 22, Ng’ang’a interviewed his own wife, Mercy Murugi, as the two shared details of their marriage life. The apostle married Mercy in 2012 after his first wife passed away.

The two had to change their phone numbers as texts and calls from suitors and ‘marriage spoilers’ were rampant. Most of the women, he says, were politicians, married women and his church members. 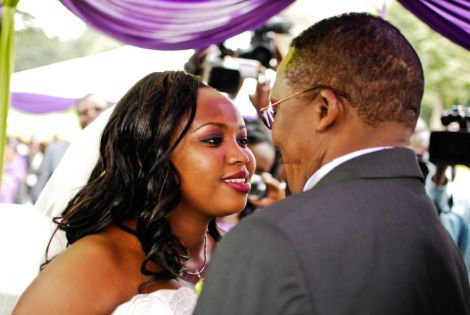 “There is a day I came and found out that she had packed all her clothes and ran away from home. My phone usually created more issues between us. I remember one day in Naivasha, a text message reading ‘Thank you for the good night we had yesterday’.

“I gave her and asked her to read it as it was a false accusation. If she had seen it later on, the situation would have escalated,” Ng’ang’a stated recalling that he had spent three days with his wife.

The clergyman disclosed that he usually receives romantic text messages and calls that he never replies to. This prompted the pastor to remove security pins from his phone and to confront the callers when with his wife, to build up trust between them.

“I was not a saint because I was married before meeting her. I expected her to come and fill the shoes of my late wife. Every time she ran away with my BMW, I followed her to their home with the police and repossessed it. However, I prayed over it and she came back and settled,” Ng’anga recalled.

According to Ng’ang’a’s wife, her thoughts that marriage would be a bed of roses were wrong.

“I have learnt through experience. His phone was giving me a lot of headaches because I always wanted to know who was calling him but I stopped fussing. That is how I defeated Satan,” she stated.

According to Ng’ang’a, women in his church constantly tried to tempt him with some even bribing ushers to get them a front-row seat during the service.

Before marrying Mercy, a university graduate and a daughter of one of his own church members, the city pastor disclosed that he received over 1,000 offers from women in his church.

“There were thousands of women who wanted me to marry them. Others were politicians, while some were bishops. A woman even offered me Ksh 3 million to marry her. They tried duping me by posing the money as offerings.

“Ushers and women in the church left after I married her as they decided to walk away. They even tried to fight her and even used witchcraft, while questioning why I married a younger wife. I think it would have been unwise to marry my agemate because at some point we would have aged and failed to take care of each other,” he disclosed.

Reasons why Diamond never visited Tanasha in Nairobi, ever!