Mlango Kubwa MCA Patricia Mutheu was on Tuesday, July 28, clobbered by police officers and injured in the chaos that ensured at City Hall.

A section of MCAs had stormed the premises and wanted to serve Speaker Beatrice Elachi with an impeachment notice signed by 59 members.

To disperse the crowd, the police lobbed teargas at the lawmakers as well as cloberred some of them, leaving Mutheu injured. 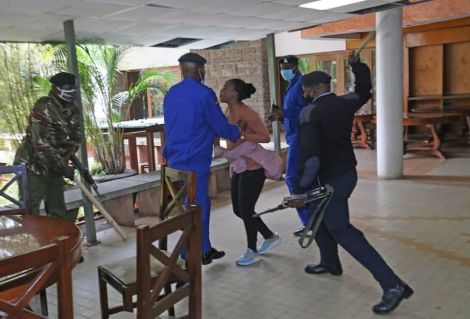 In photos and videos seen by TMZ.co.ke, Mutheu is seen on the floor as four police officers surrounded her with one of them brandishing what appears to be a rungu. 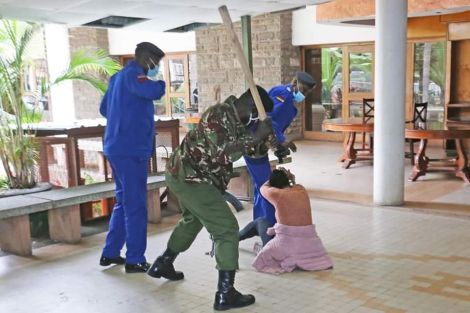 Mutheu has since reported the matter at the Nairobi Central Police Station where she was accompanied by  Kandara MP Alice Wahome, nominated Senator Millicent Omanga, among other women leaders.

During the entire scuffle, Elachi had locked herself in her office and officers barred the MCAs from accessing it.

The MCAs had kicked off a process of ejecting the speaker on Sunday, July 26, after accusing her of abuse of office, corruption, and poor leadership.

Other accusations against Elachi included; victimization of MCAs and assembly staff, impunity, disregard for the law and county orders, and militarisation of the assembly.

On Monday, Elachi had accused governor Mike Mbuvi Sonko of being behind her impeachment.

“Sonko knows that there is a new clerk who was recently sworn in and he knows that his impeachment can come out of the court now and that is the war he has with me.

“He has been using [Jacob] Ngwele (assembly clerk) in all his cases in court and right now he is very angry because he knows the order that stopped his ouster can be revived now that Ngwele is gone. The impeachment motion is motivated by that,” she stated.

Police Under Investigation After 3 Deaths During Curfew