Skip to content
Latest News Politics
May 12, 2020 tmz editor
President Uhuru Kenyatta addressing the nation from State House Nairobi on April 25, 2020.
High-octane politics as cracks widen in the Jubilee Party have made for dramatic headlines capturing national attention in recent days, but the situation has left some questioning whether President Uhuru Kenyatta’s administration has its priorities in order.

On Tuesday, May 12, the removal of Senators Kipchumba Murkomen and Susan Kihika as Majority Leader and Whip, replaced by Samuel Poghisio and Irungu Kang’ata respectively, was made official following an announcement by Senate Speaker Ken Lusaka.

The execution of it all was like a gripping political thriller; news of a planned Parliamentary Group meeting at State House and a coalition agreement with the Kenya African National Union (KANU) surfaced on Sunday, May 10, and the meeting held on May 11 before a legal challenge saw the post-poll coalition agreement suspended by the Political Parties Disputes Tribunal on May 12, the ruling, though, not enough to save Murkomen.

A vast majority of Kenyans, though, remain more concerned about issues such as job losses, floods, the depressed economic environment and the government’s response to Covid-19. 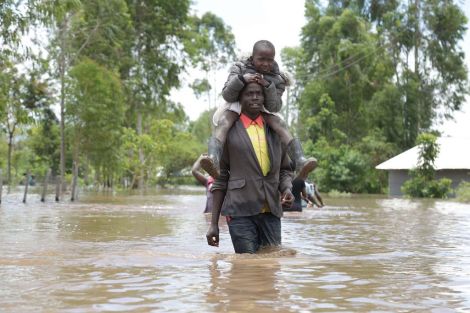 A man crosses through floodwaters in Nyando on Tuesday, April 21, 2020, while carrying a child.

Kenyans interviewed in various parts of the country on the political happenings for a news segment aired on Monday, May 11, for instance, decried the focus on politics when they expected different issues to be addressed.

Many highlighted the fact that a large number of Kenyans were struggling to pay rent as they had lost their incomes during the pandemic, calling for the government to quickly find a solution.

Others called for a long-term solution to avert the impact of the heavy rains and floods witnessed in several parts of the country, destroying property and displacing families.

Aspects of the government’s response to the Covid-19 pandemic have also stirred discontent, such as the worrying state of designated quarantine facilities.

Despite the government waiving quarantine charges at the facilities on the back of public pressure, Kenyans who arrived from China on Monday, May 11 were denied food and payment demanded when they were taken to the Cooperative University of Kenya in Karen, Nairobi for mandatory quarantine, for example.

At the same time, evictions in Nairobi’s Kariobangi North area that left several families homeless have evoked strong negative sentiments against the government, with Senators among those who questioned the evictions.

A section of Kenyans also called for the government to step up provisions of essential items to individuals and households, such as food, face masks and hand sanitisers.

Residents of Nairobi’s Eastleigh area where a cessation of movement order is in place, for instance, held a protest on Monday, May 11 demanding that the government supply them with relief food.

When making his final speech as Majority Leader, Murkomen addressed President Kenyatta, telling him that he hoped his removal would see him work for Kenyans if his presence as Majority Leader had been the stumbling block.

Whether the government has its priorities in order is a question that elicits mixed reactions, with some such as Kakamega Senator Cleophas Malala who spoke to TMZ.co.ke on Tuesday, May 12 insisting that the changes were necessary for the issues affecting citizens to be addressed.

“I think the government has its priorities very much in order. Because, for the govt to address the real issues such as Covid-19 and floods, they must have the right leadership in place.

“In the house, these individuals play a very key role in executing the government’s agenda, so without the right leadership in Parliament, it will even be difficult to implement some of these things.

“What the government needs is to bring in leaders who indeed have the interests of the people and the country at heart,” he argued.

He was echoing a point made by supporters of the President such as the Central Organization of Trade Unions (COTU) Secretary-General Francis Atwoli who on Tuesday, May 12 asked Uhuru to extend the purge to the National Assembly and the Cabinet.

“I want to thank the President and I want him to extend the hand seen in the Senate to the National Assembly where some changes also need to be made. And after that, he should look at his administration and the cabinet to find the best people to help him for the next two years,” Atwoli stated.

Watch a video from the Senate proceedings below:

Kenyan Scientists Discover How to Stop Spread of Killer Disease

Have You Seen These Photos Of Anne Waiguru While In High School?