The protestors who were mostly comprised of boda boda operators aired their grievances outside the factory’s gate as they chanted “we want justice.”

A suspected driver from Kibos Sugar factory knocked over and killed three men who were on a boda boda during curfew time along the Kondele-Kibos road on Saturday, July 18. 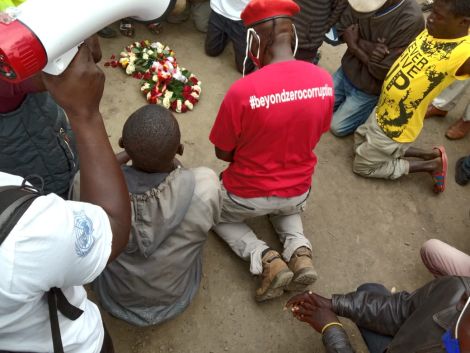 Residents of Kisumu East protesting against the failure by the police to arrest the driver who caused three deaths in a road accident on Saturday 18 July 2020.

According to eyewitness accounts, the occupants of the vehicle left Nyanza bar and were headed to the Kibos Sugar factory when the driver attempted to overtake a vehicle when the accident happened.

The three men were identified as Meshack Ouma, George Oudi and Martin Bonyo with the families of the victims blaming authorities for attempting to cover up the incident.

Reports have indicated that the men responsible for the accident are planning to escape in order to avoid arrest from the police.

Residents claim that the man behind police custody is not the one responsible for the accident as they claim to know him.

The car ownership is registered under Robinson’s Investments Limited which the owner named it after himself.

The car is a white Nissan Patrol with registration number KCV 555J with residents claiming that the driver took off to the factory after the accident.

There has been an increase in the number of people breaching the set curfew hours and congregating inside bars that have been banned by the government.

Nairobi Senator Johnson Sakaja was on Saturday morning arrested at a Kilimani bar for flouting the government’s curfew orders.