Kenyans who defy Covid-19 government directives could walk free after paying fines or doing community service with the special quarantine facilities yet to be set up.

On Thursday, May 7, 90 people were released by the courts on Ksh5,000 bail each or two weeks community service for flouting various Covid-19 measures in Nairobi.

The National Emergency Response Committee on Coronavirus (NERCC), chaired by Health CS Mutahi Kagwe had on Sunday, May 3, directed that curfew defaulters be placed in designated police quarantine facilities that were to be set up.

NERCC directed the Inspector General of Police Hillary Mutyambai to establish special holding places where the individuals will be isolated.

However, speaking to tmz.co.ke , Government Spokesman Cyrus Oguna revealed that the special quarantine centres were yet to be set up.

“That is up to them (police) whether they will have them or not. If they decide they will be arresting people then release them on bond, is up to them. The idea of quarantine areas was just a suggestion.” 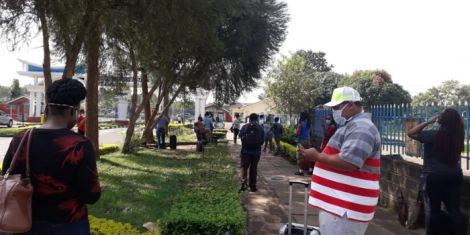 Kenyans quarantined at Kenyatta University protest against the government on Wednesday, April 15, 2020
FILE

On Monday, April 6, Kenya Gazette Supplement No. 41 formalised the highly criticised pealties for flouting Covid-19 directives including a Ksh20,000 for not wearing a mask or an imprisonment period not exceeding six months.

Oguna also added that there was no law that made it mandatory for people to quarantined if found breaking government directives.

“There is no legal requirement that people should be taken for quarantine. If a legal notice has been issued, then you are going against the law. So it is upon the police to decide whether they will prosecute you or not,” stated Oguna.

There was a widespread uproar over the mandatory quarantine punishment for breaking the dusk-to-dawn curfew especially after up to 50 people successfully escaped from the Kenya Medical Training College (KMTC) isolation facility in Nairobi.

A man from Kenyatta University Hospital isolation facility caused a stir online in April after attempted suicide when he was presented with a hefty quarantine bill.

On Wednesday May, 7, the government responded to these concerns by waiving all quarantine costs in government facilities. 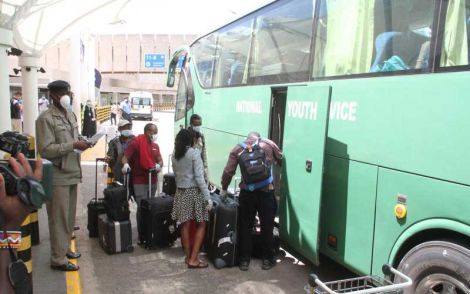 Kenyans board a National Youth Service bus headed to a government quarantine facility on March 24, 2020.
THE STANDARD

‘I packed his belongings in a gunia and sent to his work place,’ Bridget Achieng on ending relationship

Kumbe! Guardian Angel reveals how he met his 50-year-old girlfriend through Maina Kageni