Speaking to NTV reporter Ken Muriithi on Wednesday, August 6, he stated that he had supported the formula before because he was not fully briefed about what it entails.

He expressed concern that Majority Whip Irungu Kang’ata’s proposal would result in loss in revenue for some counties. 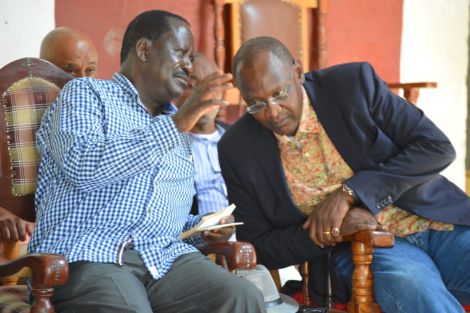 Raila Odinga (left) with Muhoho Kenyatta during the 25th memorial service of the late Jaramogi Oginga Odinga in Bondo on January 21, 2019.

“When I wrote an article for the CRA I had just come from Dubai and I didn’t know that the CRA report had been changed by a committee in Parliament,” he stated.

He urged the commission to develop a formula which also looked into the economic strengths of other regions and how they can leverage that to raise revenue.

He pointed out that other than population and landmass, which had caused divisions, the commission should also factor in activities like pastoralism in the North East and the blue economy in the coast and lake regions.

Odinga advised the senators to maintain the current formula until another was developed.

The standoff has proven to be the biggest crack in the handshake between President Kenyatta and the former prime minister.

Senator Kang’ata had warned that should the bill fail to sail through, he would mobilize other senators affiliated to the Jubilee party to vote against the Building Bridges Initiative (BBI).

“If for any reason the bill does not sail through, then we might have to reconsider our stand on the BBI,” he remarked.

He claimed if the wishes of Central Kenya residents would not be respected, then they would keep their resources to themselves.

“For instance Murang’a water is used in Nairobi. Firms use our water in industries that make billions in profits. Why should I accept the Senate to adopt a formula that allocates very little resources to us?” he questioned.

“If money shall be allocated to counties because they have expansive land, then we should also be fairly compensated for all our water if not I will block them from accessing it,” he warned.