Skip to content
News Politics
July 17, 2020 admin
DP William Ruto addresses the youth in Westlands, Nairobi on Thursday, July 9, 2020
Deputy President William Ruto has outlined plans to clean up his own house as he sets out to push his 2022 agenda. The DP witnessed a section of his allies decamp into President Uhuru Kenyatta’s camp after the Head of State initiated the purge in Jubilee and sources alleged that the DP’s camp is infiltrated with moles.

Ruto is reportedly hell-bent on fulfilling his ambitions and is keen to maintain the flow of information in his camp which has seen several top leaders ejected from plum positions in government and Jubilee Party.

“In 2022, the DP will be the country’s candidate after he deputises for the President. We have good plans and insiders in the government who will ensure he succeeds Uhuru,” sources within Ruto’s camp disclosed in an interview with the Daily Nation.

Ruto’s purge targets several Cabinet Secretaries, a Rift Valley MP and a Mt Kenya Woman Representative within his camp accused of leaking information to the government. 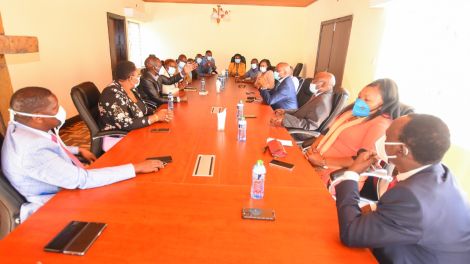 The aforementioned were also accused of being lukewarm and trying to appease both camps. The friendliness towards the government was said to be a plot to ensure that they remain in power while keeping an eye on the political developments towards 2022.

Ruto’s purge comes a day after he addressed MPs on Twitter, urging them to unite after changes made by Kenyatta in the Parliament were confirmed. The changes signalled the end of the President’s purge on Ruto’s allies.

“With the changes in Parliamentary leadership including committee membership and leadership now concluded, I urge all MPs not to be divided but work together in serving the people,” Ruto rallied on Thursday, July 16.

Soy MP and Jubilee Deputy Secretary-General Caleb Kositany, however, refuted the claims, arguing that Ruto was keen on uniting his house while mapping out his 2022 campaign.

In early July 2020, the DP unveiled a 16-member team that will spearhead his 2022 election campaign. Ruto managed to secure support from four of ODM leader Raila Odinga’s former allies in his restructuring.

The team was tasked with winning women and the youth, setting digital campaigns and unveiling a manifesto and campaign strategy.

Duale: It Was Not Easy, But I Delivered

Haji has betrayed us but we won’t give up fight, vows Kinoti