Speaking on Friday, September 4, during a meeting with MCAs from Kajiado County, he scoffed at the list of possible candidates whom he claimed his rivals were considering.

He mocked that his rivals were scratching their heads and holding meetings to come up with the best person to challenge him for the top seat after President Uhuru Kenyatta retires but had not been successful.

“They are meeting to strategize on my competitor in 2022. They have many potential candidates but they are still not confident about who can compete with me.

For years Matiang’i has been fronted as a presidential candidate by various political quarters as the man to beat Ruto in 2022. However, he has been quiet about his intentions.

On Monday, August 31, while speaking in Nyamira County, Matiang’i stated that the head of state was grooming him for greatness.

“I am like a little child who is being helped to cross a road. I only need your prayers as God holds my hand to help me cross over. I have been tipped for greatness in the country and I need your full support,” Matiang’i spoke.

Cotu Secretary General Francis Atwoli has also weighed in on the possibility of the Interior CS leading the country.

“Matiang’i can be a president. If he is backed. But you know he’s abrasive. He must work hard because you know, sometimes, people are scared of them. But he can be a very good president because he is assertive,” Atwoli stated in an interview with Jeff Koinange in October 2019.

During the meeting with Kajiado MCAs, the DP promised to protect them from Jubilee Secretary General Raphael Tuju if they got into trouble for visiting him.

Ruto stated that Tuju had no business poking into whatever he wanted to do at his residence.

“He was not invited to cook, and neither was he asked to wash the dishes or serve in any other capacity so why would what I am doing at my home bother him,” the DP wondered. 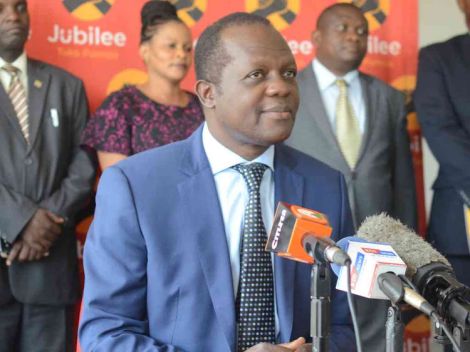 Village 157kms from Nairobi Gets Mobile Coverage for First Time