Skip to content
News Politics
June 29, 2020 tmz editor
Ministry of Lands headquarters, Ardhi House
A number of senior government officials behind the Ngong Forest land grabbing scandal have been exposed as plans to reclaim the area are underway.

Ministry of Environment has waged war on persons who encroached on the forest land as it looks to restore Nairobi to its former glory.

According to Citizen TV, the names of senior government officials were exposed in a report to Ministry of Environment Cabinet Secretary Keriako Tobiko.

A photo of Bahati MP Ngunjiri Kimani during a National Assembly Lands Committee session on March 12, 2020

Bahati MP Kimani Ngunjiri has also been named in the scandal after allegedly acquiring 18.24 acres, Major General Njoroge who was part of the Kenya Forest Board is also in the list.

A company belonging to the late Jonathan Moi is the biggest beneficiary of the forest grabbing after allegedly acquiring 1,000 acres which were later subdivided and sold according to court documents.

The forest has greatly reduced in size from an original 7,231.6 acres to its current 1,330.39 acres as majority of the grabbing took place during former President Daniel Moi’s regime.

CS Tobiko confirmed that the land has been grabbed by a number of senior government officials with the common citizen not being able to undertake such a task.

“Members of Parliament themselves both current and past, senior government functionaries, some today still in government others out of government and huge cooperations.

“It’s not the ordinary mwananchi (citizen) who got into a forest and acquired properties,” stated Tobiko.

Three churches also stand to be affected in the reclamation process with Nairobi Chapel reportedly sitting on 6.5 hectares, Mugumoini PCEA church on 2.47 hectares and St. Francis ACK church on 2.50 hectares.

Former Lands Commissioner Sammy Mwaita allocated 8.8 hectares of the land to the Nairobi Women’s Prison but the Ndungu report revealed a huge chunk of land was taken up by a private developer. 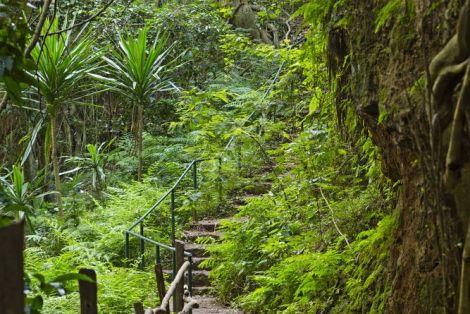 A nature trail at Karura forest in Nairobi