Skip to content
Exclusives Latest Life Style TOP STORIES
May 27, 2020 tmz editor
A matatu involved in an accident on Wednesday, May 27 at the Thika flyover near the Ngoingwa-Murram road junction.
Several people are reported to have sustained injuries after a County Government of Murang’a  ambulance collided with a matatu near Thika Town.

The incident is reported to have occurred at around 12 p.m. on Wednesday, May 27, at the Thika flyover near the Ngoingwa Murram Road junction.

An eyewitness who spoke to Tmz.co.ke stated that the matatu was moving from Thika to Nairobi when it hit the ambulance which was traveling from Kandara constituency. 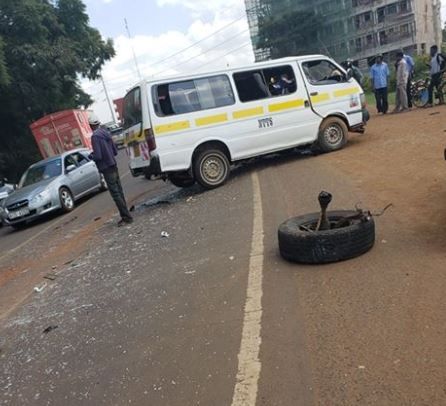 A matatu involved in an accident on Wednesday, May 27 at the Thika flyover near the Ngoingwa-Murram road junction.

“All those injured in the crash were traveling in the matatu while everyone in the ambulance escaped unhurt,” the resident told this writer over the phone.

The injured were rushed to Thika hospital as police directed vehicles to ensure the flow of traffic was maintained.

Motorists were advised to approach the area with caution.

A Murang’a County ambulance involved in an accident on Wednesday, May 27 at the Thika flyover near the Ngoingwa-Murram road junction.

The accidents came hours after popular Benga musician Jimmy Wayuni passed away in a grisly accident around Githurai area along the Thika Super-Highway.

A survey by the National Transport and Safety Authority (NTSA) released in April 2020, showed that a total of 458 people had lost their lives since the year began in road accidents as compared to 417 who died in 2019 over the same period.

Additionally, the number of passengers who had died due to road crashes has reduced drastically by 24% compared to the same period of 2019.

On the other hand, the number of pedestrians, the highest number of road accident casualties, who have succumbed has increased by 20%.

‘I will pay you 0.5m for pocket money,’ Maina tells Sanaipei Tande to have his child