Mam’Mkhize, was nominated under the, Socialite Of The Year category and for Fag Hag Of The Year award. Unfortunately, the inspirational businesswoman and socialite did not walk away with any award on the evening. This did not dim her light though. Shauwn took to Instagram, to show that she is not a sore loser. She posted about the awards the following day, and shared some light moments about the whole thing.

Award or not, Mam’Mkhize, is surrounded by nothing but love. After telling her son Andile, that she didn’t win, he told her not to worry as he will give her an award for loving him. Now, this is more that cute. Besides, MamMkhize has been making waves in the social media scenes, and recently clocked a million followers on Instagram.

“Goodmorning , she went to the feather awards with two nominees and came back with nothing , but guys nothing beats LOVE then I am telling my Prince @andilempisane10 that I didn’t win and he is saying don’t worry mommy I will give you an award for loving me …. how cute was that ❤️❤️❤️❤️❤️❤️ and I will tell you on my next post what my friend sad @tha.simelane 🤣🤣🤣🤣🤣#myworldmyrules #kwamamkhize.” 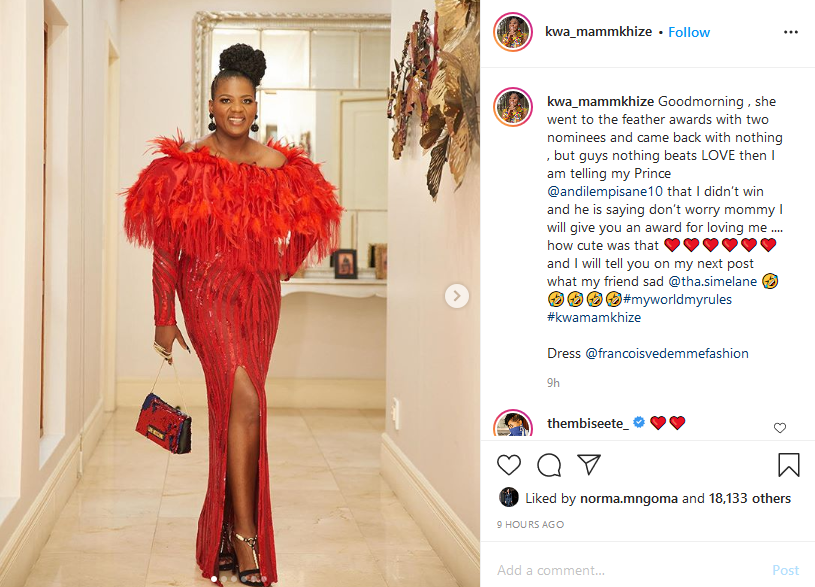