Nyeri Town MP Ngunjiri Wambugu on Wednesday, June 9, slammed two former Chief Justices after they relayed their views on President Uhuru Kenyatta rejecting six of the judges that had been recommended to him by the Judicial Service Commission (JSC).

In a statement, Ngunjiri accused the duo, Willy Mutunga and David Maraga, of being the cause of disunity between the judiciary and the two other arms of government.

The legislator, a close ally of the president, added that the two were trying to intimidate the president into appointing the six by releasing press statements and going to the press.

“CJ Mutunga and CJ Maraga should just shut up…They established the thinking that the Judiciary is independent and not a part of government,” Wambugu begun.

“They imagined themselves to be above the President in terms of the pecking order of government,” he added.

Wambugu’s statement came just hours after Maraga accused the president of ruining careers and the lives of the rejected judges.

Maraga noted that the president’s decision had led Kenyans into believing that the six have integrity issues.

“You are literally ruining the careers of these judges and totally ruining their lives and that of their families. That is so serious that it cannot be done so casually as it has been done. That is extremely bad,” stated Maraga.

On the other hand, Mutunga faulted the president for his actions and indicated that his behaviour was beneath the dignity of his office. He added that his conduct amounted to pettiness.

Ngugi and Odunga were part of a bench that declared the Building Bridges Initiative (BBI) null and void.

The matter has caused a mixed reaction from Kenyans, some who support the president and others who don’t.

“If there are investigations to be completed on the “Six Judges”, shouldn’t Uhuru do his work? Afterwards, he will either appoint or charge them,” political analyst Mutahi Ngunyi stated.

“No Uhuru Kenyatta does not listen, and even if he does, he won’t understand,” economist David Ndii stated in response to Ngunyi. 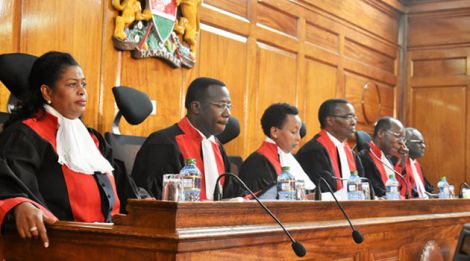 MPs Move In On BBI Monies

Murkomen accuses President Uhuru Kenyatta of ‘lying’ to the Senate

How Raila is Staying Safe From Coronavirus – Aide