Speaking to journalists after a meeting the duo had with President Uhuru Kenyatta, Sonko alleged that previous wrangles had been caused by political leaders who were pitting them against each other.

“For all the times I talked ill of my brother Badi, I apologize, and moving forward, we will work together as a team,” Sonko stated.

On his part, Badi reiterated that the two would work together, with an aim of improving infrastructure in the city.

Nairobi Governor Mike Mbuvi Sonko on Wednesday, August 12, offered to host a meeting with Nairobi MCAs to discuss on how the county government would work together with the Nairobi Metropolitan Services and end wrangles in the county.

Speaking during a meeting with opinion leaders and youth group leaders from various wards, Sonko called on the assembly to fully support the Nairobi Metropolitan Service (NMS) and any agenda proposed by President Uhuru Kenyatta.

“We were all elected and Nairobians are watching. Let’s end these unnecessary wrangles and work for our people. This is our future.

“The wrangles and divisions must end now. We no longer need camps but the unity of purpose that will ensure the NMS and the county deliver on their mandate,” Sonko stated.

The governor acknowledged that it was possible for the county to work closely with the NMS without any squabbles as long as both parties demonstrated mutual respect.

“There will be no problem as long as we all recognize that we have laws that govern our operations and we can hold high respect to one another and the rights of the people who put us in office,” he noted.

The governor noted that the projects the president sought to accomplish included; affordable housing units, the sewer system in Mukuru Kwa Reuben, Kibra, Uthiru, Kariobangi and highlighted that the projects would be concluded faster if the two factions worked together.

“Let’s support each other,” Sonko stated.

At the same time, the governor expressed displeasure at how some police officers were using excessive force.

He was referring to the recent assault of Mlango Kubwa MCA Patricia Mutheu during a scuffle at City Hall, where the MCAs wanted to impeach speaker Beatrice Elachi, who has since resigned.

“The rule of law must be respected. Police should not apply excessive force on human beings. What was experienced at the assembly recently was a heinous act,” he stated.

He was speaking during the funeral of the late Gabriel Maina, a resident of Mukuru Kwa Reuben slums who died during the demolition of houses in the area.

“To the people saying I don’t respect the NMS, I just want to tell that Saddam Hussein to respect the lives of Nairobians,” Sonko stated. 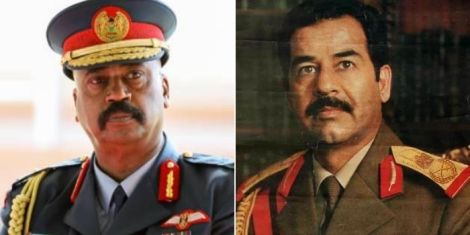 Masks to Sell as Low as Ksh5 – Trade CS

‘My in-laws fed my hair and nails to black hen,’ city woman narrates