A section of teachers in the country has opposed plans to reopen schools early ahead of a meeting to be convened by Education Cabinet Secretary Professor George Magoha on Monday, September 14.

The crisis meeting is set to be held at the Kenya Institute of Curriculum Development (KICD), and is set to address the confusion surrounding the reopening of learning institutions across the country.

School heads have, however, warned that learning institutions are not ready for a reopening citing a number of reasons. 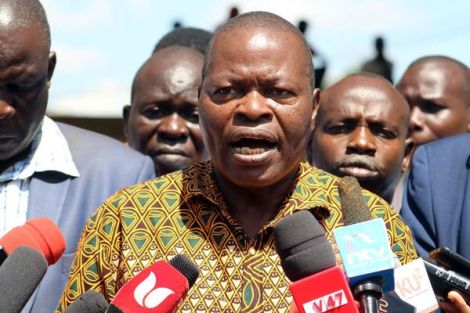 “Earlier proposals to reopen schools in October were rejected by the task force, we agreed schools to reopen in January 2021 for a fresh start,” explained Indimuli.

“We are not going to discuss whether to open schools before the end of the year because that will interfere with the school calendar.

“What is on the ground is not encouraging as no efforts have been made to improve school infrastructure and install water in the institutions,” he noted.

Kenya Primary Schools Heads Association (Kepsha) chairman Nicholas Gathemia revealed that they are waiting for the Ministry’s directive on reopening of schools.

Magoha on Wednesday, September 9 stated that he had been misquoted by a section of the media and maintained that the reopening of schools remains to be in January 2021.

The CS in an emergency meeting held on Friday, September 11 discussed the phased reopening of schools and issued primary and secondary schools a six weeks deadline to prepare for the resumption of studies.

County Directors of Education (CDEs) were also directed to ensure that 622,000 desks, lockers and chairs were made and delivered to schools by October 19 with the government using Ksh. 1.9 billion in the project.

Education CS George Magoha (sitting at the center) demonstrates social distancing to education stakeholders during a crisis meeting in Nairobi on Friday, September 11, 2020

‘Every time they look at me they see Tecra,’ – Anerlisa Muigai

Is Churchill to blame for comedian’s depression and downfall? Njoro explains

Christmas plans! Where to find heated pools in Nairobi