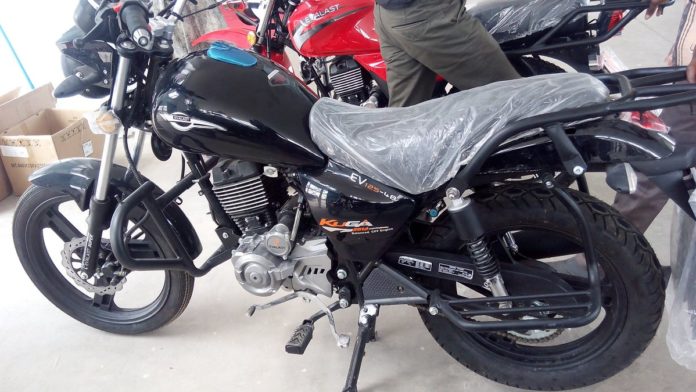 You probably have heard about the Kuga riders Association, the Evalast Kuga has the biggest cult following of any bike in Kenya. You will see them modified or stock all over the country.
The bike is built in a cruiser design making it very comfortable for long road trips. When
shopping for a beginner bike at a low budget the Kuga is logically the best option to go for. The bike is a versatile machine that can be used as a commuter bike, a Delivery bike, a Bodaboda and with some modification it can be a trail bike. The price tag and simplicity in build makes it an ideal bike for motorcycle enthusiasts that are into modified bikes to go all crazy on.

Aesthetics
The bike doesn’t have much to offer in terms of the looks department. It looks like your normal bike but you will notice the riding position is lower than your ordinary bike. With a basic round headlight that if asked I would say looks out of place in terms of size to the rest of the bike owing to the bike’s wide tank. The rear mudguard is well sculpted with a nice gradient curve and a perfectly integrated tail light that doesn’t unnecessarily pop out like on most budget motorcycles. The bike has a 17 inch front tyre and a 16 inch rear tyre that helps it achieve that cruiser look.

Power
The bike boasts a 150cc engine that is built using advanced technology that ensures it has very minimal vibrations which is a unique to the bike considering it has an overhead valve engine. It has a Balanced CPF engine with a mute engine cover that is specially designed to aid in reduction of vibrations and ensure a comfortable ride for long distances. The 5 speed gear box is very pleasant to use and very fluid making every gear change a burst of torque. Talking of torque, the bike has a massive pull which you can feel as you accelerate, you can easily take off on third gear from a standstill. The kuga’s top speed has been rated as 120kph but there are stories and videos of some riders who have done 135kph on modified versions of the bike without an engine swap.
The engine is also very fuel efficient with a rating of between 45-50kms per litre and if you go soft on the throttle you can almost achieve 55km per litre of petrol on a well maintained bike.
The bike has also proven to be strong as it is being used to haul farm produce in some counties.

Handling
For a 150cc bike under 100k budget the bike handles surprising well. Thanks to its low centre of gravity and well distributed weight the bike can take corners well even at high speeds. The bike has front disk brakes and drum rear brakes that are sufficient for the bike. Its stable even without a pillion and even you can use only the rear brakes without bobbling the bike if you have a longer stopping distance, the front brakes are very effective and the front shocks are designed to take in as much of the inertia as possible. The backward seating position helps in weight distribution as well as comfort. That makes the bike very easy to ride even for beginners without the risk of toppling over as they learn to balance the bike.

Verdict
The bike is built in a simple but yet reliable manner, parts are easy to find and are very cheap compared to its competitors. The bike is very easy to fix and maintain with most of the owners doing the bikes regular maintenance for themselves, but any motorcycle mechanic can handle the bike. It is an excellent beginner bike or a bike for someone who wants to upgrade but on a tight budget with a new one going for 102,000 which is a very reasonable amount. Do not expect to get glances when you pass by but expect biker waves from other riders who know the bike. This is a good bike to beat city traffic with, do business with or just for random rides. The bike is also known to handle a lot of abuse so it can easily be modified and customized in any way you like.

Why is Mother’s Day more popular than Father’s day? (Opinion)