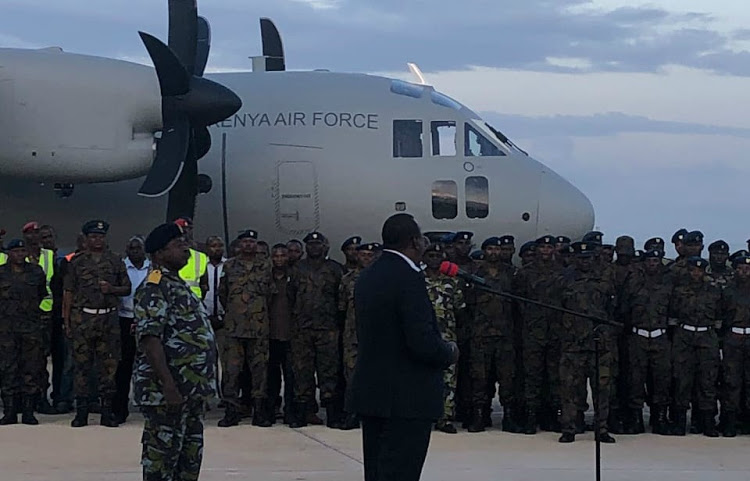 President Uhuru Kenyatta and army chiefs when they received the C-27J Spartan aircraft at the Embakasi Garrison, Nairobi on January 30, 2020.

Members of the Kenya Defence Forces are facing a pay cut as part of government efforts to mitigate the effects of the Covid-19 pandemic.

According to a memo seen by TMZ.co.ke, the officers have been tasked with aiding government efforts to contribute to the Covid-19

“The threat and severity of coronavirus disease (COVID-19) continue to pose health and socio-economic challenges across the world.

“Thus, the government has established the Covid-19 Emergency Response Fund, in order to strengthen its response capacity,” the memo reads in part. 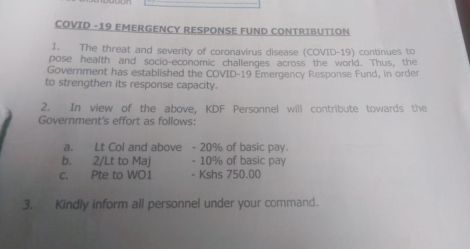 The memo from the Kenya Defence Forces (KDF) detailing the pay cuts.

On Wednesday, March 25, President Kenyatta led the pack when he announced that he would take a voluntary pay cut of 80% together with his deputy.

Cabinet secretaries were also poised to take a 30% pay cut, a move that was emulated by governors and their deputies, Supreme Court Judges and National Assembly Speaker Justin Muturi and Senate Speaker Ken Lusaka.

A host of other officials, including senior ones from the Judiciary, also announced that they were taking pay cuts to supplement the government’s efforts to raise funds.

The funds were supposed to kickstart the newly-established Covid-19 Emergency Response Fund to mobilise resources for containing the spread, effects and impact of the pandemic.

As of April 21, the Fund, chaired by Kenya Breweries Limited  Managing Director Jane Karuku, sent a press release detailing that it had managed to raise over Ksh1.2 billion.