The accident, which took place just after Githurai and before Roysambu, caused a snarl-up and commotion along the road.

Reports reaching our newsdesk indicate that the traffic extends way past Exit 10 at Kahawa Sukari. 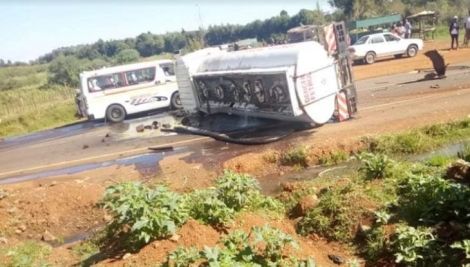 Accident along the Iten-Eldoret route owing to a collision between an ambulance and a fuel tanker on March 24, 2020.

From the video, the trailer is seen in the middle of the road, with a crowd surrounding the scene. It, however, does not look damaged.

Incidences that led to the accident and the state of passengers in the trailer was not clear by the time of going to press.

Other motorists using the Thika Superhighway have since been advised to use the service lane.

Accidents have seemingly risen in the last week.

On Thursday, May 28, three passengers died as eight others were injured in a midday accident at Makutano area of Athi River, Machakos County.

Eyewitnesses narrated that the speeding matatu rammed into the bus which was parked along the Mombasa-Nairobi Highway.

Yet again, two accidents were reported on Wednesday, May 27, that of Kikuyu Benga musician Jimmy Wayuni, and another where several sustained injuries after a County Government of Murang’a an ambulance collided with a matatu near Thika Town.

According to the National Transport and Safety Authority on April 23, 2020, 954 people have perished on Kenyan roads since January, an increase of 0.1 per cent from 2019, where 953 people died.

Of the 954 casualties, 367 were pedestrians followed by motorcyclists at 238 deaths and 156 passengers.

The Authority noted that reckless driving remains the most common cause of accidents.

NTSA further established that four out of every five crashes in the country could be attributed to human error and brake failure.

This included breaching speed limits and freewheeling in an attempt to save on fuel.