Skip to content
Exclusives FEATURED Latest TOP STORIES Videos
June 3, 2020 tmz editor
The wreckage of a car that was involved in a road accident along Mombasa Road on May 23, 2020.
A truck driver and his turn-boy are on the run after being involved in a grisly road accident that left five people dead.

A report aired by Citizen TV on Wednesday, June 3, detailed that the truck collided with a private car which had five occupants on Tuesday, June 2.

The accident occurred at Narumoru along Nyeri-Nanyuki road a few minutes to 7.p.m., when curfew commences. 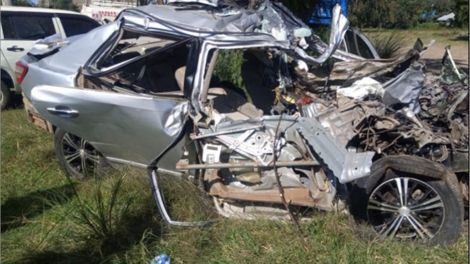 The car involved in an accident at Narumoru, Nyeri on Monday night, June 2, 2020

The wreckages of the vehicles were dragged to a police station in the area as bodies of the deceased were ferried to Nyeri Referral Hospital morgue.

Details of the road accident are still scanty as the deceased have not yet been identified.

The case sheds light on motorists who have been flouting Covid-19 rules as the government issued directives on the number of passengers allowed in private and public vehicles.

Owners of private cars were not allowed to carry more than 50 per cent of the declared passenger capacity of their vehicles.

Health CS Mutahi Kagwe further added that a fine of Ksh 20,000 or six-month imprisonment would be imposed on lawbreakers.

Police are set to launch an investigation into the accident. The law enforcers have also launched a manhunt for the driver whose whereabouts are not yet known.

An estimated 3,000 Kenyans die in road accidents annually despite concerted efforts by the state and the private sector to promote safety on the highways, according to the National Transport Safety Authority. 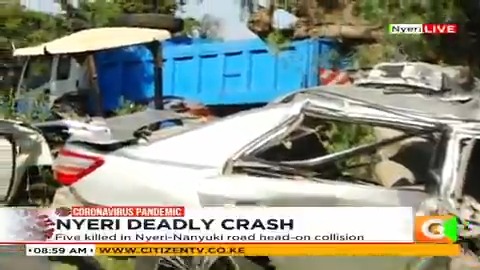 ‘I made it but you are no longer here,’ Babu Tale mourns wife shares how she supported his political bid