Skip to content
News Latest Life Style Politics
May 27, 2020 tmz editor
Rachel Ruto during a meeting with Partners for Care Organization in Karen, Nairobi on May 5, 2018
Kenyans on social media have been sharing an image thought to be The Standard newspaper cover for the Wednesday, May 27, 2020 issue.

Tmz.co.ke tapped into the skills of digital media expert Brian Muuo to research the photo which has gone viral on political circles in social media and sparked debate about its controversial title, Rachel in hiding? which was in reference to Deputy President William Ruto’s spouse.

The article claimed that Ruto’s marriage was on the rocks and that Rachel was no longer living in their official residence in the leafy suburbs of Karen, Nairobi. 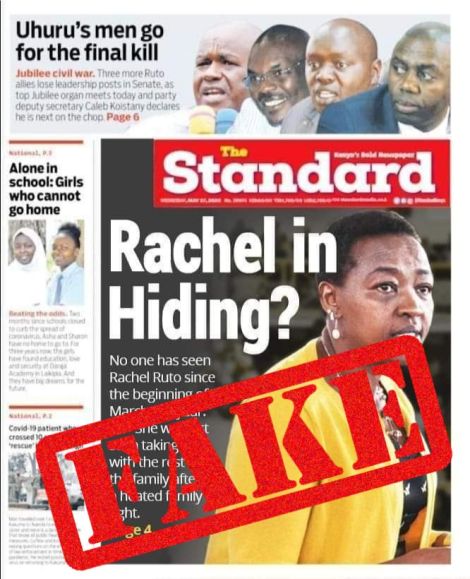 The Standard newspaper on May 27, 2020, clarified that the story about Rachel Ruto fleeing from Deputy President William Ruto’s Karen home was false
FILE

“Nobody has seen Rachel since the beginning of March this year. She was last seen taking off with the rest of the family after a heated fight,” an excerpt from the article alleged.

Tmz.co.ke independently verified that the viral image that has polarised social media users is false. The affected media house also termed the image as fake on its Twitter handle.

The legitimate cover story of The Standard newspaper of May 27, 2020, is about former Prime Minister Raila Odinga speaking about collaborating with President Uhuru Kenyatta in a government of national unity.

The Standard Group PLC’s Head of News Kipkoech Tanui sort to set records straight, writing a Facebook post that, “fellow Kenyans, the purported headline on Mrs. Rachel Ruto being attributed to us on social media is fake and the intentions are obvious.”

The falsified cover also claimed that page 4 of the newspaper bore the whole story about Ruto’s wife but the real physical newspaper did not carry the story.

Further, the power couple held special prayers for the Covid-19 pandemic at their Karen home on April 26, 2020, which discredits claims that Rachel had moved out in March.

“As we continue the fight against the spread of the Covid-19 pandemic, we pray for those who have lost their loved ones and commit to God those that are infected.

“We pray for our medical workers who are in the frontline in tackling the outbreak. We have faith that we will win this battle soon and our country will return to normalcy,” the DP’s spouse shared, adding photos of the two during the service. 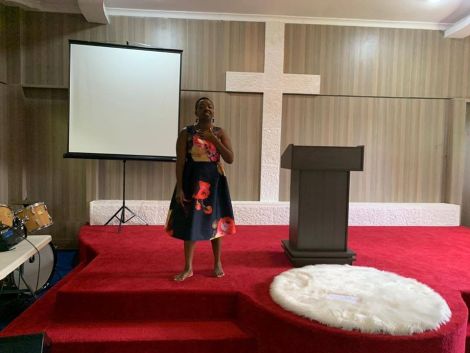 Kenyans on social media are increasingly falling for fake news and sharing the same to friends and family without taking time to verify.

“Be skeptical of headlines. False news stories often have catchy headlines. If shocking claims in the headline sound unbelievable, they probably are.

“Look closely at the link. A fishy or look-alike link may be a warning sign of false news. Many false news sites mimic authentic news sources by making small changes to the link. You can go to the site to compare the link to established sources,” digital media expert, Brian Muuo advises.

Social media users should also look out for unusual formatting since many false stories have misspellings or awkward layouts, which require a very keen eye.

In the current case, the short excerpt of the false story had an unfamiliar font that a keen reader should have been able to identify.

False news stories often contain manipulated images or videos. Sometimes the photo may be authentic but taken out of context. False news stories may contain timelines that make no sense or event dates that have been altered.

If no other news source has reported the same story, it may indicate that the story is false. If the article is reported by multiple trustworthy sources, it’s more likely to be true.

In Kenya, the government has also moved to fight the propagation of fake news by drafting laws that stipulate stiff penalties for culprits of false information.

“A person who intentionally publishes false, misleading or fictitious data or misinforms with the intent that the data shall be considered or acted upon as authentic, with or without any financial gain, commits an offense and shall, on conviction, be liable to a fine not exceeding five million shillings or to imprisonment for a term not exceeding two years, or to both,” reads clause 12 of the new law. 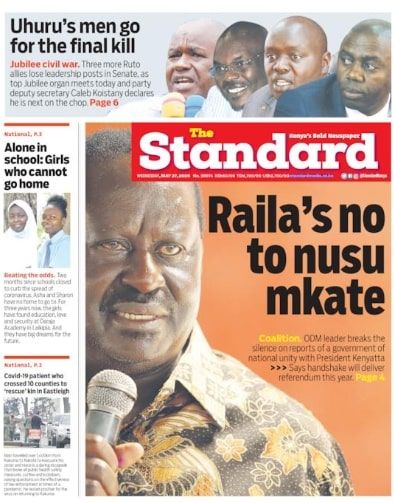 The original cover story on The Standard newspaper of May 27, 2020

Family did not like Tecra Muigai’s boyfriend – Source reveals