According to a report aired by Citizen TV, after the announcement by Spokesperson Kanze Dena on Monday, June 15, State House rolled out a raft of measures to ensure that the spread of the virus remains at a minimum.

First, State House closed off its gates with those already inside the residence not allowed to leave while those outside the facility denied access.

The executive wing of the house that hosts key officers including the State House comptroller and the spokesperson have been placed under partial lockdown and remained out of bounds for a majority of State House employees. 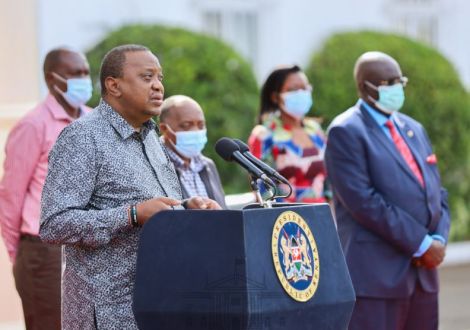 President Uhuru Kenyatta during the press briefing at State House on June 6, 2020.

After the virus was confirmed in the country, a number of adjustments were made at State House with President Uhuru Kenyatta canceling all planned meetings outside of State House and settling to hold the conferences virtually.

For Madaraka Day and Labour Day Celebrations, the events were held at State House with a thin guest list that was thoroughly screened before being allowed in.

At the gate, visitors are subjected to a first screening to check their temperatures, at point B, thorough screening is carried out with sanitising carried out on visitors and their equipment.

At the gate, medical officers are planted to supervise the screening processes. Another holding area located 100 meters from the gate where more screening is carried out including visitors asked to dump their facemasks for new ones.

The four who tested positive had been isolated and contact tracing had commenced.

“The infected officers were admitted at the Kenyatta University Teaching, Referral and Research Hospital in Kiambu County for treatment,” read the statement from State House.

The president and his wife, Margaret Kenyatta, who were also subjected to the tests, turned out negative.

In May, the head of state disclosed that his wife, mother, Mama Ngina and son, had been confined at Mombasa State House when he first announced the cessation of movement at the Coast Region and Nairobi on April 6.

Positive cases in the country have risen to 3,727 with the virus having claimed 104 lives.

‘My ex almost made me sell my soul to the devil and join the brotherhood,’- Bamboo

3 Dramatic Instances That Put Waiguru In The Limelight