The meeting was convened to review progress made in the AU-led mediation process to resolve a row involving Ethiopia, Sudan and Egypt over the Ksh480 billion Grand Renaissance Dam (GERD) project in Ethiopia.

Egypt has vehemently opposed the filling of the dam arguing that it would deprive their country of important water from the River Nile.

Kenya has observer status in the AU-led mediation process, with Uhuru pushing for an African-driven solution to the dispute.

During the meeting also attended by Ethiopian Prime Minister Abiy Ahmed, Uhuru commended the AU team for steering the process effectively so far.

“I further join the Chair and Colleagues in commending our distinguished experts for the detailed feedback report and the progress made in the negotiations within a short timeframe, despite the complexity of some of the issues that they’ve had to deal with.

“This process has vividly shown that ‘African solutions to African problems’ is the way to go. We can resolve our disputes through negotiations and mediation within the framework of the African Union,” he stated.

The President voiced his expectations that the tripartite negotiation process would lead to a “mutually acceptable and sustainable resolution” of the dispute.

He, however, observed that unilateral actions taken by any of the three countries posed a threat to the negotiations.

“I urge all stakeholders to continue adhering to the commitment and to refrain from taking actions or making statements that may jeopardize the negotiation process and reverse the gains made so far,” he asserted.

Ethiopian PM Abiy Ahmed voiced his support for the AU-led mediation process stating his hope that it would lead to a timely resolution. 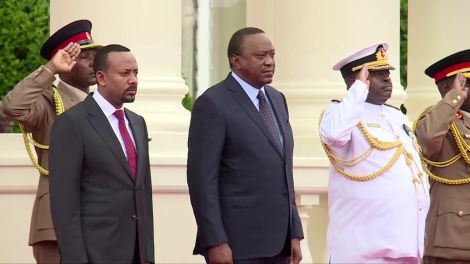